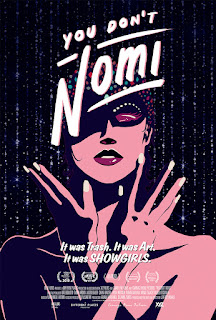 How would you describe Showgirls (1995) to someone who has never seen it before? A neon drenched, hyper-sexual fever dream that only the mid-1990’s would have the gull to produce?  That doesn’t even begin to do justice to this truly baffling stripper-epic. It’s cringe-worthy and hilariously quotable dialogue, bad acting and overall cartoon level of non-reality has earned it a place alongside Troll 2 (1990) and The Room (2003) as among the best so-bad-its-enjoyable films. It seemed like only a matter time until someone made a documentary about this horny cult-classic. You Don’t Nomi Me (2019) answers the burning question, Why and how did this film come to be so beloved despite bombing upon its release. First time director Jeffery McHale takes a bold choice of doing this strictly voice-over using clips, archival interviews, news reports and photos. It’s a great way to frame the documentary and makes for a more interesting overall choice. Nomi manages to not only tells a very on topic and cohesive story about the making of the film but gives you a nice overview of the films of Paul Verhoeven and of course the cult that sprang from the film. The film is also well-balanced in terms of showing all angles: Angles like is this anti-feminist film, exploitation trash, a comedy masterpiece, misunderstood or totally justified in its bad reviews? The film gives us all very interesting and very different insights instead of just a ninety-minute love fest. I really respect not giving into the cult-film worship by allowing the nay-sayers a chance to share their opinions as well. 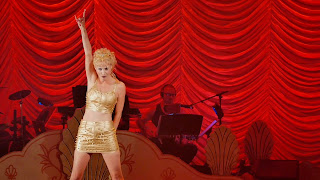 Similar to Andre Gower’s brilliant documentary Wolfman’s Got Nards (2018) Nomi doesn’t shy away from the Showgirls more problematic issues, in this case it’s the underlying racism in the film. Its astutely pointed out that the African American characters are only on screen as pillars to Nomi’s quest and have very little to no agency of their own. There is this interesting debate the documentary tackles which is the gender politics. You can make a case for the film being just a trashy exploitation of women masquerading as a pro-feminist film. And, the case can also be made that it is very pro-feminist. McHale wisely never seems to take a hard stance and, in a way, it seems to suggest all of these opinions are right.  Having the film end on a high note and coming full circle on the fandom really put as big goofy smile on my face but also gave me a new perspective which of course is what a great documentary should do. Is it a coke fueled surrealist masterpiece? Is it just a trashy-big-budget sleaze fest that happened to find a midnight crowd? Maybe its all that and more. Either way I was fascinated with this journey that McHale and the incredible experts took us on. Its impressive that right out of the gate McHale produces a well-structured, thought provoking and wildly at the end feel good documentary.

Throw on some body-glitter, grab a burger, dance like nobodies watching and make this a must-see film.