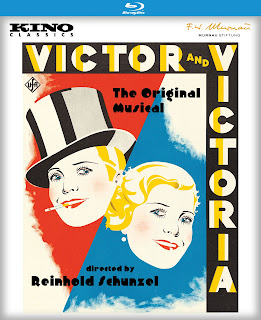 Similar to Madchen in Uniform (1931), Victor and Victoria from 1933 was made at a  very chaotic time for Germany with the rise of Hitler and the Third Reich. Sadly, it would be the last of the LGBTQ films made in the country for a period of time. Viktor is an out of work actor looking to hit it big in the theater scene. Susanne is a young aspiring actor also looking to make her mark in the business. The two meet and Viktor takes a young actress under his wig and has an idea. He will revamp her Berlin cabaret act as a man playing a drag queen. Soon both out of luck actors find the success they have been looking for, but hi-jinks ensue in this musical comedy. 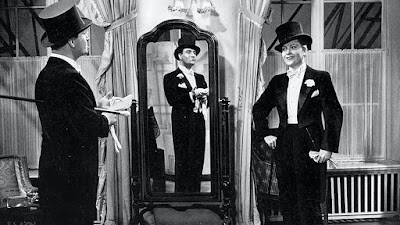 Film fans and musical fans are probably more familiar with the Blake Edwards Victor Victoria (1982), a big budget lavish musical starring the legendary Julie Andrews. It was interesting to see the original film version, as I had only been familiar with the '82 version. Reinhold's film has a lot of charm with some fun comedy bits but its probably its two leads that really make this film shine. Hermann Thimig and Renate Muller play off each other wonderfully and they no doubt have chemistry together. Renate just dazzles in male-drag, instantly becoming a gay icon along with Marlene Dietrich, looking very dabber in her tux. As I say above, this film is bitter sweet as, it was the last of its kind to explore LGBTQ themes before German Nazi party took over. It was also around this time that in America the film code was strictly enforced, also forcing queer characters back into the closet, only popping out in coded depictions.

If I'm being honest as charming as I find the '33 version is, I think I prefer the Andrews version. The '82 film is given the budget to greatly expand on the characters, to flesh them out but also add new ones which serves the story very well. Of course the production values are not in the same league, again due to the film having the advantage of both a healthy budget and gorgeous color. The music is also so much better in the newer version. But, I cannot totally dismiss this version as it was groundbreaking in its themes, its beautiful and inventive camera work as well as the sparkling performances of its leads.

Kino Classics presents the film in a wonderful print. The picture is incredibly clear with very little in the way of artifacts and scratches. I wager to bet the film has never looked better. The sound is great as well with a nice healthy soundtrack with no hissing or distracting background noise.

The features include a wonderful commentary with film historian Gaylyn Studlar. Gaylyn gives a lot of great historical context for the film and its place within LGBTQ cinema. Much like the  Madchen in Uniform (1931) commentary, we get a great deal of information on the cast, crew and most importantly the political climax in which the film was made.

This is a must-own for fans of queer cinema and just film scholars and lovers in general.