The Thing from Another World (1951) Warner Archives

The Thing from Another World (1951) Warner Archives 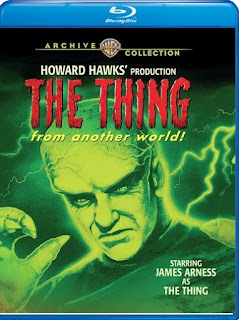 Based on the novella "Who Goes There" by John W. Campbell The Thing from Another World (1951) is often over shadowed by its big budget '80's remake counterpart. So much so that I think people tend to forget just how groundbreaking the original 1951 version really was. The film kicked off the wave of '50's sci-fi in America but it also took the genre seriously. There is some debate over how much if any Howard Hawks directed, but one thing is clear, its very much a Hawks film both in style and feeling. His films had this organic way they flowed and Hawks was the person to popularize characters over lapping dialogue, therefore giving speech a more chaotic and natural appearance.  The film centers around a group of scientist that find a crashed flying saucer in-bedded in the ice. Through a series of circumstances the creature is flawed out of his iced coffin and unleashed onto the small motley crew.

The Thing from Another World is hands down among the best science fiction of it's decade and transcends its flying saucer/alien creature trappings because Nyby and Hawk's took the material seriously. Nobody is winking at the camera, no rubber monster is stalking lover lane teenagers. James Arness with the aid of makeup by Lee Greenway is transformed into a monster that is still terrifying decades later. Seriously, the first time I saw The Things entrance made me jump ten feet out of the chair and its still very chilling. Not to mention the use of pyrotechnics which still takes my breath away when I watch it. Unlike a lot of other alien films that came after it, this film treats its characters with a lot of maturity and pathos. Nyby gives us a peak into the relationship/history between Margaret Sheridan and Kenneth Tobey that feels real and organic and not shoved in. Its just a credit to the excellent writing that we get some fleshed out character moments before all hell breaks loose. And, Oh boy when it does the film's pace is nearly break-neck. Every scene is advantaging the plot with no filler or needless sub-plotting to get in its way. This my friends is economical story telling at its finest. Its deep when it needs to be but, also knows when to be a action filled horror film as well. Its not suggest this film is without its flaws and those are mostly the limitations of the budget. But, I would argue that the lack of budget forced the filmmakers to get more creative with the material.

This is why I hate when the '51 version The Thing gets an honorable mention at best. It was one of the first of its kind to use the Cold War paranoia or fear of "the other" in the coating of a high concept science fiction film. Other great examples would be most famously the pod people absorbing wholesome middle America in The Invasion of the Body Snatchers (1956).  The Thing did it first and in my mind it did it better. So I say, if you are a horror fan and have dismissed this film as a not-as-good  version of John Carpenters excellent film, I say to you. Check it out! Its amazing and there is a reason Carpenter himself loved it so much he not only featured it in Halloween (1978) but of course remade the film in his own style.

So, for the longest time I only had the old DVD version of The Thing. I was really excited to finally upgrade this. Overall I was very happy with the restoration. Small details come to life and the picture is worlds better than SD 720. If i had to lobby one minor compliant it would be that a few scenes actually look too bright almost to the point it washes some facial features out. Thankfully this is one in like one scene so its not that distracting.

No bonus features are included.