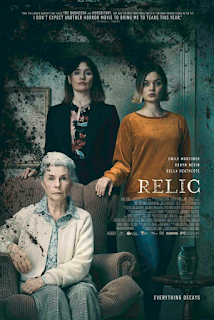 It seems like some of my favorite horror films within the last twenty-years have been made in other countries. Its not to say Americans cant make a good fright-fest but, when it comes to making some really stand out nihilistic nightmare fuel, international is the way to go.  Kay (Emily Mortimer) has been alerted that her elderly mother Edna (Robyn Nevin) hasn't been seen or heard from in a few days. Kay along with her daughter Sam (Bella Heathcote) go to Edna's home to investigate only to find no signs of life. Its worth noting that Edna has a history of erratic behavior.  Kay informs the police that her mother is missing only for her to mysterious turn up a short time later. But something is not quite right with Edna or the house for that matter.

Its a rare thing when a director (especially a fairly new one) can take some very well worn horror troupes and make them feel fresh and exciting. Such is the case with Natalie Erika James excellent feature debut. From frame one Relic establishes a dark and oppressive tone that only gets bleaker and more distorted as the tale unravels. I noticed that even daylight shots are still dreary and somber with zero warmth or comfort. Cheap jump scares are mercifully not present, rather, the film's more horrific moments feel very much earned.This is thanks to well done sound design, utilizing the dark foreboding house all whilst riding the wave of tension and mysterious mood Natalie has crafted. From the outset we are presented with a mystery that is engaging and, as things go from weird to bizarre I relished finding the breadcrumbs of clues sprinkled throughout. This is a film that requires and rewards the audiences upmost attention. Relic was made on a modest budget yet feels like a bigger production by way of slick and creative camera work. Huge props should go out to the cinematographer Charlie Sarroff and production designer Steven Jones-Evans for giving the film a dark fairy tale quality. And, you cannot help but be marveled by the incredible visual moments that add to the haunting atmosphere. There are moments in the film, especially the finale that are sure to stick with me for awhile. Couple this with wonderful and surgical like editing and a creepy-dread filled score by Brian Reitzell and you really have a special indie horror film. Also I would be remiss in not mentioning the outstanding cast which truly bring this film to life. All three female leads all play off each other nicely and, it never feels like one is trying to outshine the other.

If I had to lobby a criticism it would be I never felt like the mother Kay (played to perfection by Emily Mortimer) has the kind of story arch it maybe could have had. I think had we established somehow that Kay had a very troubled relationship with her Edna, the ending would have had a bigger impact. Also I wish they could have explored the theme of the different generations of women and how Kay and Edna's relationship was starting to mirror Kay and Sam. I think this was an interesting opportunity that felt like it comes off a bit flat.  Both Natalie and co-writer Christine White seem use to a short film format which is great as the film is paced wonderfully and dense but feels lean on character development. Honestly, most times I recommend some filmmakers cut back but in Relic I feel like it needed maybe ten minutes or so of character study. This side, I still regard Relic as an exciting breath of fresh air that is much needed in an oft stale market place of remakes and spin-offs.  Natalie Erika Jame's indie horror film really packs a punch and, for a first feature length film cements herself as a interesting and bold new voice in the genre.I cannot wait to see what else she has in the works.
Posted by The Video Attic at 8:58 AM