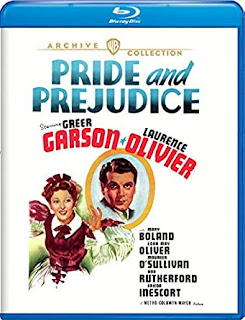 I wont lie I've never read Jane Austins novel Pride and Prejudice published in 1813, but damn if I dont love a dry lavish costume drama. This is why I think I was actually kind of excited for Warners to re-release the 1940 big budget version on HD. Mrs Bennet (Mary Boland) is sent in a tizzy with the arrival of two rich single men in the town. She aims to marry one of her daughters to one of these wealthy bachelors. Enter Mr. Darcy (Laurence), one such gentlemen who is interested in Elizabeth (Greer Garson) but of course treats her snobbishly. Now a battle of pride and prejudice ensues but can one swallow their pride?

The Great Ziegfeld (1936) director Robert Z. Leonard helms this marvelous adaption and whilst its apparently not very faithful to the source it does over flow with comedy of upper-crust manners and has delicious wit and charm in spades. This biting and sardonic humor is aimed squarely at class-climbing. But to be more specific, it constantly shows how these characters do this absurd dance of appearing 'respectable', especially as far as women are concerned. This in my opinion is what makes the film a fun watch. And, yeah the film never really directly talks about the perils of snobbish class-warfare, but I dont care because I'm here for the big lavish production designs (which won it a Best Art Direction at the Oscars), grand costumes that the film is drenched in. Pride is given a beautiful scope and nice visuals thanks to the brilliant cinematographer Karl Freund. Freund was a legend in his field, having worked on such classics as Dracula (1931), Kay Largo, Metropolis (1927) etc.

You also have the 11-time Oscar winner Cedric Gibbons (Wizard of Oz, Forbidden Planet) doing what he does best, which is create beautiful worlds for the characters to inhibit. Add a underrated score by Herbert Storthart (Wizard of Oz, A Night at the Opera)  and you have some real heavy hitting talents behind the scenes. But, of course in front of the camera you have some incredibly talented players of the Golden Age of Hollywood. Greer Garson gives a witty, playful and engrossing performance as Elizabeth and its among her best work. Laurence Oliver was good at doing his Oliver-ness. Mary Boland though steals every scene she is in as the delightfully overbearing matriarch Mrs Bennet.  Classic films buffs will no doubt remember Boland for her turn in the cult classic The Women (1939). Bottom line: This movie may not be faithful to the book and thats OK there is like a ton of other later adaptations that I'm sure are more akin to the material.  But, I enjoyed this because of its ultra grand, attention to detail lavish production from Hollywoods Golden era. The stars were big, the costumes outrageous, yet there is real incredible talent behind these films that cannot be denied. If you are even semi-interested in films of this ilk, you`ll have a good time.

Warner Archives never ceases to amaze me. This transfer is beyond incredible and here the excellence in scope, set design, costumes and production design are celebrated to the highest degree. Little fine details now leap out at you and I dare say this film has never looked this good. The sound is also great with crystal clear dialogue and it showcases Herbert's score to its best. The extras include a trailer and a cartoon The Fishing Bear also released in 1940.

As always Warner provides such a breathtaking transfer and its why I am always excited for whatever film they re-issue.