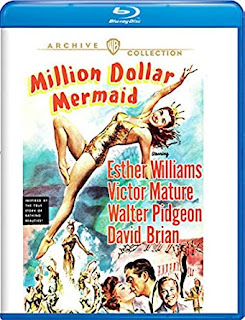 I'm a sucker for big splashy '50's productions. You know, the kind that were on their way out when a decade later when films like Psycho (1960) and Easy Rider (1969) forever changed the Hollywood landscape. And, while a shift to more gritty, realistic films of the '60's and especially the '70's was totally necessary, I still love the big lavish eye sores with big budgets and even bigger stars. This goes double for the dream-like wonderland of the dances and music crafted by the legendary Busby Berkeley. Its for this reason I decided to give Million Dollar Mermaid (1952) a try. After all I've heard the film referenced countless times and I`'ll watch anything with character actor Jesse White in. The film tells the story of real life Australian swimmer and entertainer Annette Kellerman (Ester Williams). With the help of the carny showman James Sullivan (Victor Mature) and his sidekick Doc Cronnol (Jesse White) they propel her to stardom.  We follow her overcoming illness as a child, becoming a top swimmer and getting into some 'hot water' over a one-piece bathing suit and the various up's and downs of her career and life.

As far as a biopic goes the film, frankly this isnt a good one. Its not super focused on Kellerman and like most movies takes a lot of liberties for the sake of cinema. This wouldn't be a issue but I will be honest, outside of the very well done stage numbers the film tends to be dull. I think what I had issues with is that director LeRoy never seems to find the emotional core, making this a movie thats more razzle dazzle than drama-biopic. Serious traumas in her life like the death of her father and a major injury are all glossed over and never really dealt with by the character. Listen, there is nothing wrong with a big wonderful Technicolor day dream. But, you have to remember this is a real persons life they are depicting. I also cringed so hard at a bit with Jesse White dressed as a Native American.

The thing that does keep this film moving is of course two things: The performances. Ester Williams just positively sparkles as Annette. She has the good looks of a '50's sex pot with the good girl image of Doris Day. She handles the role with a lot of grace, pose and never goes over board. Of course the film is also best remembered for its amazing water choreography by Busby Berkeley. It's just marvelous to watch and, no matter how many times I see something Berkeley has produced it always leaves me in utter awe.

So, yeah its kind of meh when it comes to the story department but, lets be honest its more about seeing Williams in her scandalous one-piece and the amazing numbers. The film had been a huge hit at the time of its release and remained a favorite of Williams. I thought it was entertaining minus some dry moments that could have used a cohesive emotional center.

This is considered one the best uses of Technicolor so, given Warners track record with restorations I was chopping at the bits to see this in all of its glorious HD splendor. And, it of course did not disappoint. The colors are rich and really pop in this new transfer. Busby's flashy numbers leap off the screen in this new edition! The sound is great as well and showcases the music to its upmost. Dialogue is crystal clear and with no hiss or background noise.

The extras include: Vintage Pete Smith Specialty Short: Reducing (8m): The MGM short is about fat lose. Its um...very dated but interesting none the less. Also included is a classic cartoon short Little Quacker and probably my favorite a rare Lux Radio Broadcast with Ester Williams and Walter Pidgeon. Rounding out the features is a trailer.