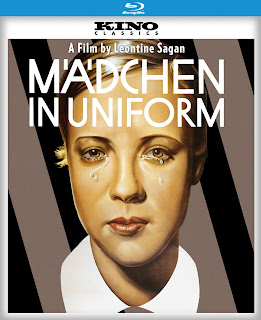 I first got to review Madcchen in Uniform (1931) during a digital screening during Pride Month. I was very happy to see Kino providing a window into LGBTQ landmark cinema for the community and allies. Set in the back drop of a private school for the children of ranking military officers, the film is a story of the awakening sexuality of a student towards her teacher. On the outset this seems creepy but as historian Jenni Olson mentions in her commentary (more on that later) both the student Manuela von Meinhardis (Hertha Thiele) and the teacher were in fact twenty-two years old at the time. Leontine Sagan's groundbreaking film is not only boundary pushing in its theme of lesbian love (this film is considered the first of its kind) but it is also a very timely in its overt political themes. The harsh military like way the school is run is chilling when you think that at the time the film was released Hitler was just rising to power at this time, and would be named Chancellor in '33. I think having that in hindsight makes everything even more potent.

Like a lot of German cinema the film plays with light and shadow. This moody way of filming is called  'German expressionism'. German expressionism would be famously used in American cinema in Film-Noirs.  The camera is so evocative and inventive with its framing, reverse shots and tracking shots, all which is incredibly sophisticated. The interior of the school and the way its filmed and how shadows are cast on things, helps create a almost fairy tale like feel to everything. This seems fitting as the film kind of plays out like a mature fable. A fable of innocence against oppression and a journey of self discovery.

This is one of those movies that, I honestly feel like if it doesn't move you by the end, then you might have  a stone for a heart. Sagan portrays the sexual awakening of Manuela with pathos and conviction which helps us the audience engage and root for her. It makes her struggles and the heartbreaking finale all the more impactful. Hertha Thiele and Dorothea Wieck in their respective roles really bring the entire piece to painful life. Its such a moving and harrowing film that really bowled me over the first time I've seen it and, only deepens for me the with multiple viewings. If you are a fan of German cinema and also Queer cinema this is a must-see film.

Kino Classics has provided a simply stunning print that showcases the cinematography and camera work Germany was famous for. There are no scratches to be seen and what we get is a clean clear picture worthy of the film itself. The sound is also great with no distortion or hissing on the soundtrack. The film includes a track with film historian Jenni Olson. Olson does a fantastic job at navigating the history of the play on which the film is based, as well as the cast, crew and director. It was also interesting to hear about the remakes that came after it. She is incredibly well researched and I enjoyed learning a lot from her track.