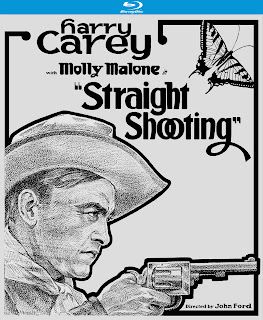 Kino Classic presents John Ford's first feature film Straight Shooting (1917) Later this year they will also be releasing Hell Bent (1918) another early Ford film on Aug. 25th. Cheyenne Harry (Harry Carey) is hired by the rich sinister rancher Thunder Flint (Duke Lee) to run a family off their land. But Harry is conflicted when he gets to know the family. An epic battle ensues.

This is the first Ford film as mentioned and it's really wonderful to have this surviving film. Sadly, not all of Fords body of work has survived which is a shame. What I noticed right off the bat is this film is so awe-inspiring and the scoop is breathtaking. He uses inventive camera work that really pushed the boundaries of the medium. He would keep pushing the art form all throughout his career. The story is also a bit more fleshed out with characters that weren't all good or bad, yet complex. Carey is one of the earliest examples of the anti-hero in cinema and I was stunned by how the gray areas of his character. Harry Carey is great and turns in a subtle and heartbreaking role. Carey made a huge impact on Westerns and John Wayne was said to model a lot of his acting style off of Carey. Ford, even in his debut shows off his work with action scenes and, whew, the man really new how to stage thrilling set-pieces. If you are on the fence about silent films Straight Shooting is a brisk, well paced and extremely well shot film. Any film scholar or buff should consider this a must watch.

Straight Shooting is presented in a stunning new 4k restoration by Universal Pictures. It's been cleaned and scrubbed of a lot of scratches, dirt and artifacts. Small details in the production design, costumes and characters really come to life as I suspect never before, expect maybe on its opening run. I talk about the film having some wonderful scope and cinematography and this new print highlights that in all its cinematic glory. The sound is great as well and features a new score by Michael Gatt.

Kino Classics offers a nice selection of extras including a feature length commentary with John Ford historian Joseph McBride. It's a lively and incredibly informative track and I think its worth while and helped me like the film even more on my second watch. Rounding out the features is:Bull Scores a Touchdown (10mins) video essay about John Ford and his career by film critic Tag Gallagher. Tag also wrote a very nice piece for the booklet that comes with the film. Overall, this is a great film and should be considered a must watch for Western and just film buffs in general.