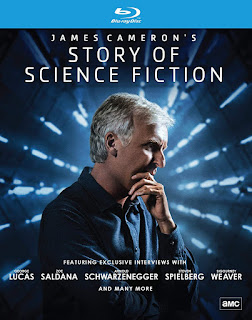 I’m a lover of all film genres but I think it’s the so-called ‘fringe’ genres like horror and science fiction that attracts me the most. I think what attracts people to these films is both genres are able to tackle social issues and veiled metaphor that other genres cannot, all under a fantastical coating.

The original Star Trek for example was not only groundbreaking for its diverse cast but also talked about ‘60’s topics like war and race-relations. Invaders of the Body Snatchers (1956) has often been seen as a meditation for Cold War and communist paranoia of the 1950's. AMC presents James Cameron’s Story of Science Fiction, a multi-part series exploring different aspects of the genre and its cultural impacts.

The format is simple: James Cameron sits down with his guest, typically a director. Cameron interviews them inter-cut with film clips and interviews with actors, visual effects people and critics.  The interviewees are a really interesting cross-section of Science Fiction writers, writers, actors, Astronauts, visual effects, musicians etc. I think that the show does a fantastic job at providing a wide-range of different opinions and knowledge. And, its just awesome to see Ridley Scott or George Lucas talking to James Cameron about the epic films I’ve conjured up. I was skeptical going into this series and asked myself: Being a big sci-fi fan will it contain any new and interesting information? I am happy to report that even for die hard fans of the genre this series provides some great bits of trivia. And yes, this series is perfect for fans of the genre but also a wonderful window for newcomers. The series doesn’t spend a lot of time on older films (though they do touch upon them) which makes me think that this show is aimed towards a younger audience. I don’t see this as a flaw but, I would have liked to see a bigger focus on the history of sci-fi which were the building blocks to the movies that are given a bigger platform to. 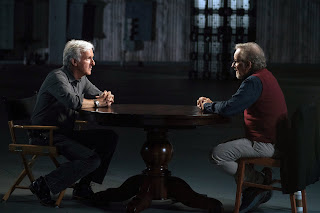 Only someone like James Cameron could get all these brilliant directors together for a in depth and sometimes candid talk about science fiction. The show somehow manages to be incredibly fresh with a wide range of interviewee's from all walks of life. I really like that outside of the main directors the show doesn't half ass its panel of guests. They have people who have literally been to space talking about science fiction which is very cool in my book.

The Blu ray looks great. The film clips are of course in SD which is a bit jarring in contrast but doesn't that I would say is too distracting. The disc has some nice extras in the form of extended interviews with George Lucas, Christopher Nolan, Ridley Scott and more.

If you are a science fiction fan or you are new to the genre this is a fun show that brings together some of the biggest and most influential directors that are generation has ever seen. The wealth of knowledge and stories is pretty invaluable and, as a artifact of film history is worth the purchase price alone.  A must Own!