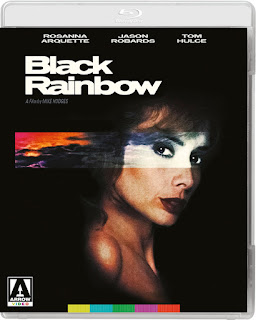 Mike Hodges might not be a household name but, throughout the '70's and '80's he has directed some very interesting genre films like Flash Gordon (1980), Get Carter (1971) and Black Rainbow (1989) a little known thriller from the late '80's.   Martha (Rosanna Arquette) is a medium and her father Walter (Jason Robards) helps her with her 'act'. The two seem to swindle people only one evening Martha starts predicting the deaths of whistle blowers. Gary Wallace (Tom Hulce) a investigative reporter is on the case.

So, I had actually never heard of this film prior to its Arrow release. As thrillers go, Black Rainbow is an interesting one. It was way more understated than I had expected. It certainly is more style and arty dialogue and the pace moves much slower. The film never commits to being outright surreal nor does it follow the traditional thriller/supernatural route. This is where the film kind of gets stuck in this weird limbo. Its not typical enough for the mainstream but its also not weird or outrageous enough for the midnight crowd. There is no doubt this is a strange film with a vibe that perfectly reflects its subject, however, for me it doesn't take big enough swings to be truly memorable. To be frank I actually found myself getting bored, which is the unforgivable sin of cinema. Hodges other films are anything but so I was taken back by this. This is one of those movies that has a lot to say but doesn't hit the mark on its core themes. For me what keeps this film watchable is Rosanna Arquette. Its interesting that she actually plays a medium long before Patricia did in Medium. As always Arquette brings a wonderful and strange pathos to the character and she perfectly fits into the films off-kilter world.

Black Rainbow is an odd film and I liked aspects of it. But, for me it played it maybe a little too safe and should have really went for a strange even surreal quality.

The film looks great and this new transfer balances the colors incredibly well. Faces have a nice natural color and the moody visual style of the film is highlighted. The sound is also great with a nice 2.0 mix. Dialogue is clear as is the soundtrack. There is a nice mix of features, mostly stuff ported over from an older release. We get two commentaries. One is a previously recorded track with director Mike Hodges. And, we also get a brand new commentary with historians Kat Ellinger and Samm Deighan. We also get a nice array of vintage features including.