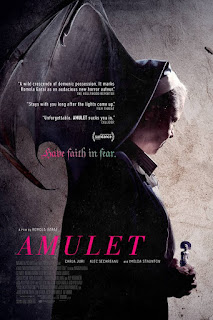 Today I watched two screeners, both of which felt like a choir to get through rather than entertainment. The latter being Romola Garai's feature film debut Amulet. Tomaz (Alec Secareanu) is a homeless ex-soldier in London. The young man is taken in by a nun named Sister Claire (Imelda Staunton) and given a flat to stay in, in exchange for doing some work around the place. He meets Magda (Carla Juri) a strange woman with an even weirder mother. And, things of course get more sinister from there. Oh boy. Amulet has a interesting poster and I had gone into it nothing virtually nothing about it. I think the first groan I let out is the fact that Tomaz is a fractured soldier. This is such an overdone cliche. It's used so much because its a short cut for writers to manufacture fleshed out characterization.  Why is he so messed up? Well hes a soldier so, yeah duh. Amulet is a film that feels a jumbled mish-mash of a emo-teens scribbles, then those scribbles were taped together to form something that resembles a three act plot. And, clocking in at 100 minutes the film actually feels more like 120 or more. The metaphors and "symbolism" feels so forced and again, I've seen this all before many times.

Normally I love weird, grimy bleak and kind of hard to follow films. Take Hereditary (2018) for example, that movie works because Aster plants clues and great foreshadowing to maximize the impact of the ending. It feels like a fully formed and planned out narrative. And, as weird as the situation spirals into, he always has some relatable themes at its core to keep things from going into complete edge-lord nonsense. I felt very cold towards the characters, towards the situation not to mention the plot makes very little sense, especially the finale. Even the big "twist" of Topaz's character, which is teased the entire film (and is "paid off" in the finale) feels anti-climactic. Another much better film Relic (2020) is also a slow burn of a film but again, Natalie James uses relatable topics and situations to build the horror. You can see reflections of her characters in a lot of people we know or hell even ourselves. Where I think the issue happens with Amulet is, it takes a very basic A-typical story line and is stretched to the brink fit a feature length. This is why I actually think this would have made for a much better short film. Convoluted plot aside I think its the shallow characters that really doom this movie.

So, I always try to say something nice about a film and I will give credit in terms of the acting. Alec Secareanu, Carla Juri, Imelda Staunton are all great despite some of the hilariously bad lines they have to sell.  Imelda probably is my favorite (and woefully underused) and she dazzled every second she was on screen. I wish she had a bigger role.


Amulet is a bleak and almost unbearably slow film that is 100 mins when it could have worked better as a very interesting short film.
Posted by The Video Attic at 12:17 PM