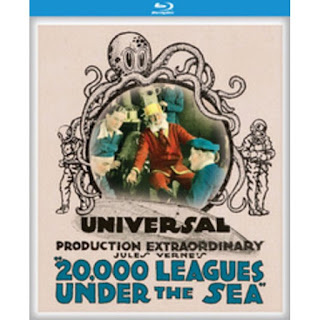 No doubt most of you have heard of 20,000 Leagues Under the Sea, even if you`ve never read the book. Many different versions of the classic tale by Jules Verne exist. In fact the 1916 version re-released by Kino Classics, is not the first but second film adaptation. Captain Nemo (Allen Holubar) and crew go on an underwater adventure based on the legendary book of the same title.

Fan's and film historians a like seem to agree that Paton's 1916 version of 20,000 Leagues is a flawed film on a narrative sense but groundbreaking for its visuals. Strangely this version of the film also crams in another adaptation of Verne's story "Mysterious Island" into the cinematic narrative. If you are looking for a book faithful adaptation will be sorely disappointed. The film version takes a lot of liberties with the source material and not for the better. Leagues is further sunk with shoddy editing, aimless direction and  bad acting even for silent movie standards. Paton also weirdly spends a lot of time on needless sub plots that doesn't actually further the main narrative. Thus we get a movie that has a lot of pacing issues.

Despite its flaws the film is noteworthy for its pioneering effects by George Williamson J.Ernest Williamson. It's also the first film to film underwater by way of something called a sea-tube. More on this in the commentary. We take this kind of photography for granted but it must have been quite the thrill to see this for the first time, on the big screen in 1916.

Though the film isnt great film scholars should make it a point to see this movie, if only for the groundbreaking effects and underwater footage.

Kino Classics as always does a fantastic job at providing a wonderful new print. The transfer is great especially considering this film is over one hundred years old. You can tell a lot of clean up has went into this restoration. While there is still scratches I wager this film hasn't looked better since its original run. The film includes a new score by Orlando Perez Rosso. Historian Anthony Slide has a great feature length commentary. Slide provides a wealth of knowledge on the cast, crew, making of the film as well as the groundbreaking underwater photography.

There may be better versions of the classic Jules Verne adventure story but, I think every film buff should check this out, if only for its leap in visual storytelling.