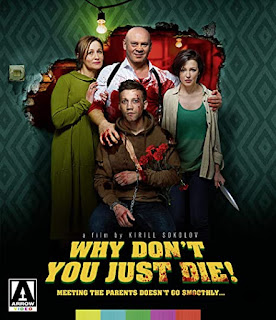 * Some Spoilers for this review. Sorry but its unavoidable.**

Director Kirill Sokolov first film debut exploded onto the scene with a bang with 2018's Why Dont You Just Die! which finds a home in the US from Arrow Video. Andrey (Vitaliy Khaev) is a nasty corrupt cop who is the victim of a home invasion/attack by a young thug named Matvey (Aleksandr Kuznetsov). Money, betrayal and a victim that just wont die in this bitterly dark Russian comedy. The film opens with a lot of tension and mystery then quickly explodes into a cartoon level of hyper-violence and an orgy of blood. This first ten-fifteen minutes will be a good marker if you like this film or not. Sokolov for better or worse wears his influences firmly on his gore soaked sleeves. Clearly this is the directors love letters to Quentin Tarantino and oddly enough the spaghetti Western genre (lots of western music cues, and even a traditional stand-off/show down.) The first act and mostly second is a nearly break neck paced hyper-stylized which can get a little much if I'm being honest. It certainly stinks of a overly ambitious first feature film by a young film student. I think its possible to be clever and interesting why also reigning things in just abit. Its the same issue I had with 2017's The Babysitter, which was overly obnoxious about its slick "cool" style over story.  But, where the film succeeds over Babysitter is it does manage to tell a good (albeit somewhat predictable) story. The use of a non-linear structure kept me engaged throughout the first and second act.

However, I think where the film starts to show its cracks is in its final act. The last fifteen minutes starts to feel somewhat one-note -that note being Matvey just not dying (hence the title) and I kept waiting for an interesting twist at the end which never happened. Its this lose of momentum that sadly muddles an otherwise great film. Even the fairly consistent tone changes to something more serious and it almost feels like a different film, which is a bit jarring. While I thought the characters were fleshed out it was disappointing that the mother Tasha played wonderfully by Elena Shevchenko is so flatly written. Now, I understand that sometimes Mother characters, especially ones that dont factor into the thrust of the story might be challenging but she's pretty much only a punching bag for Andrey, which is frankly hard to watch. I kept waiting for her to get a cool or interesting arch but instead she gets a rather mean-spirited and bleak send off. It feels like Sokolov rushes towards a very predictable ending that anyone could see a mile away. Why manages to be entertaining for the first two acts but seems to run out of steam. Still, you cannot deny how incredible of a first feature film this is. If Sokolov can find his own voice while still paying homage, and also reigning himself in, I think he could be the next big thing within the genre. I want to stress that, even though I thought it has its flaws this is still a damn entertaining film and I am very excited to see what the filmmaker has in the works.

Arrow always delivers when it comes to a nice clean transfer and Why Dont You Just Die! is certainly no exception. The image is incredibly crystal clear and sharp and, serves to highlight the detailed production design. Die has a weird color palate of greens and yellows and this transfer really showcases that evocative style. The sound is also great with a nice 2.0 track. Dialogue comes through just fine and highlights the various music/music cues and rich sound design. Arrow gives this movie a great disc. Features include an insightful new interview with Kim Newman which explores the history of single location's in cinema. Newman is always very interesting and this is a nice feature. There are some nice behind the scenes features including storyboards (BD-ROM content) and some nice footage of rehearsal. I'm a sucker for seeing how films are made so this was a treat to watch. Rounding out the features is a collection of short films which, again is a great addition and shows the very beginning of Sokolov's career. Overall this is a great collection of extras and I hope that we see more films from Sokolov that are released through Arrow Video.