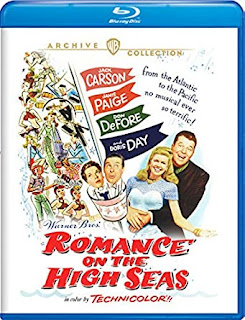 Let's get one thing out of the way. I love classic movies but I have never been big on musicals. For whatever reason they never seem to do it for me. Honestly, the only musical I enjoy is probably Rocky Horror or Phantom of the Paradise.  So why would I choose a musical from post WWII?! Well, I am a big fan of Curtiz and Jack Carson. Also, there is something to be said about getting out of ones comfort zones cinema wise. Michael (Don DeFore) and Elvira (Janis Page) both distrust each other from the very start of their marriage. Elvira suspects her husband of cheating as he constantly breaks off engagements. And, Michael also thinks Elvira is fooling around. High-sea hi-jinks ensue when night club singer Georgia (Doris Day) assumes Elvira's identity in a scheme to trap her husband in infidelity on a cruise. While on the cruise, Michael hires private eye Peter (Jack Carson) to spy on Elvira who is actually Georgia.

As you can tell from the plot description the film you need to suspend some disbelief-however I kind of love these over-the-top and frankly ridiculous plots. As always, Curtiz brings a polish to this production and this kind of big splashy production seems to be right in his wheelhouse. This truly was a big mega-budget film with rich production design, lavish costumes and sets not to mention grand musical numbers by the legendary Busby Berkley. The cast is great as well and Romance is filled with wonderful character actors like Jack Carson, Don DeFore and of course Janis Page and Doris Day making her feature film debut. Day of course known for her singing dazzles with her voice as well as ease and charm in front of the camera. This film also features a favorite actor of mine S.Z Sakall a German actor who normally played funny-supporting roles. Film fans will recall him in Casablanca (1942) and Christmas in Connecticut (1945). Fo not liking musicals I will say this movie didnt convert me to be a lover of the genre but, I will say it was a decent enough film. Now, I know that sounds like a back handed compliment but I did enough aspects of it. Sure, its silly the plot is kind of hard to believe (which is par for the course with a lot of older movies) but its a bit of fun mindless fun. A breezy and fairly predictable movie which is probably most famous for being Day's first film.

Warner's rolls out a stunning looking film. The colors truly pop in this new print of this post-War Technicolor bit of fluff. All artifacts and scratches have been scrubbed clean and it really helps showcase the lavish and grand scope of this film which was typical of the era. Sound is also great with a nice crisp clean sounding track. Features include a vintage Sing-A-Long which is 10 minutes in length. A vintage Warner Hare Splitter cartoon and trailer rounds of the features.