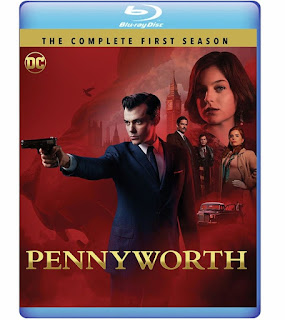 With big screen hits like Joker (2019), Wonder Woman (2017)  and television shows like Batwoman and Doom Patrol, DCEU is finally catching fire after a string of disappointments. The origin of Alfred Pennyworth the Wayne's faithful butler is detailed in this new pre-Batman show. Pennyworth is a former British SAS soldier who, looking to branch out forms his own security company. The former solider soon finds himself the target of an extremist group called The Raven Society, whose goal is to over throw the government. Pennyworth show runner Bruno Heller developed Gotham for Fox. If you`ve been living under a rock Gotham the series which ran a respectable five seasons, tells the story of a young Bruce Wayne (David Mazouz) James Gordon (Ben McKenzie) and of course the future roughs-gallery of Batman villains. The show was a hit but some die-hard fan's didnt like how the show would slide into sometimes over-the-top. I actually liked how the show blended gritty Nolan Batman with a dash of the Adam West era. Heller is now heading up another Batman origin story, this time set before Bruce Wayne is even born. Pennyworth certainly feels more grounded than Gotham and my first impression is it plays things things way more seriously. Thankfully Heller injects some much needed humor into the mix. The show is set in the '60's and the costume design and production design is really well done. Heller creates a world that you can instantly engage with. Despite some rough patches Pennyworth is a very entertaining show with plenty of nice twists and turns.The show has already been picked up for a second season due out in late October of this year.

Warner's does a great job at with this transfer. Details are sharp and you can see the hard work that went into the '60's era backdrop. The color scheme is not overly bright but extremely moody and well done and the 1080p helps highlight this. Sound is also good and this track really shows off its amazing soundtrack and sound design.  The season has no extras.

Gotham had a nice mix of camp and grit yet Pennyworth tries to lean more to the latter. This is probably a good choice, even though I enjoy Gotham un-ironically. If you are a Bat fan or even someone new to the comics, Pennyworth is a interesting new spin on the lore. Worth checking out.