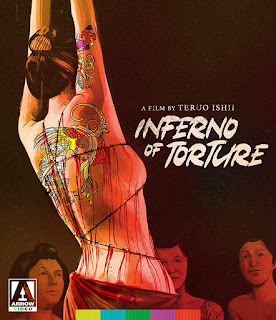 There really is truth in advertising, as, by looking at the cover for Arrow's release of Inferno Of Torture (1969), you know exactly what you are in for. In the backdrop of a geisha house, two master tattoo artist battle for who can create the ultimate masterpiece literally on the backs of girls. Inferno right out of the gate is a almost cartoon level of blood and gore. So, if goes without saying but, if women being raped and tortured is triggering, you will most certainly want to skip this film altogether. Now, with that out of the way lets begin.

This is Arrow's fifth film released by writer, director Teruo Ishii. Ishii is a director that can somehow straddle the line between in your face and weirdly beautiful even subtle at times. Inferno is a visually stunning film, something that those not familiar with Ishii might be surprised by. Since the film is all about the art of tattooing there is of course a lot of great body-art on display. And, of course a lot of nudity if your into that. The plot isnt what i`d call amazing but it was engaging enough throughout its nicely paced ninety-four minute run-time. I liked the emotional through line that helped raise the stakes and make it a more compelling narrative. The ending is very satisfying, with a finale that gore hounds are likely to not forget. And, because this is a ero-guro its chocked full of steamy erotic sex, nudity, blood and guts with some nice set-pieces. Overall, its not my favorite of Ishii's work (that would probably be Malformed Men) but, the film has a decent plot, the pacing is well done and of course its beautifully shot with some very well done action sequences. If you are new to the films of Ishii I dont know if this would be the best to start with but, its still a good film and I'm glad to see Arrow has re-released this.

Picture wise Arrow has done a fine job at cleaning this film up. The new scan is clear but not overly washed out and it maintains the mood and color scheme that Ishii intended. As I stated above this is a great looking film and this release truly does it justice. The sound is also great with no background noise or hiss and dialogue comes through crystal clear.

The release may be short on features for this release but, they are great none-the-less. A nearly thirty-minute featurette entitled: Teruo Ishii: Erotic Grotesque Nonsense and Japan's Cult Counterculture. This is basically a shortened version of Jasper Sharp's Miskatonic Institute of Horror Studies and his lecture on ero-guro movement and its key creators like Teruo Ishii and Edogawa Ranpo. This is a very eye opening interview/lecture with Sharp who helps put this sub-genre into film and a historical context. I know a little about this genre/style of film but, I still learned a lot and this is perfect for new comers to this type of Japaneses film. This is such a great addition. The second feature is a running commentary track by  Tom Mes. Mes gives a entertaining and enlightening track which, like the Sharp featurette really helps put the film into a greater context and frankly made me like the film more on my second viewing.  Rounding out the features is an original trailer.