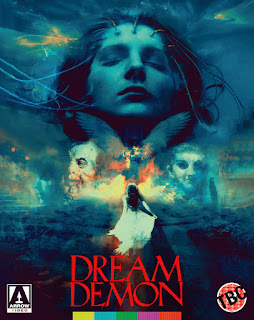 I've seen it before, and i'll say it again, Arrow Video is one of the most interesting labels, because they have such interesting releases which include mainstream films but also little known gems. And, they give both equal amounts of love. Dream Demon from 1988 is a film I had never heard of, and, chances are you haven't either. This British film centers on Diana (Jemma Redgrave) and her upcoming high profile marriage to Olivier (Mark Greenstreet). This sets off a chain-reaction of horrible nightmares which begin to result in grisly murders. She begins to understand the nature of this horrible dreams with the aid of Jenny (Kathleen Wilhoite) a woman with a mysterious past. So, yeah. Where to begin? Dream Demon feels like the filmmakers blended the core premise of A Nightmare on Elm Street (1984) and its later sequel's surreal dream-states with the gross-out grotesque splatter effects of early Peter Jackson with a heaping helping of the phsycho-sexual world
of Clive Baker's Hellraiser (1987). Whew!

This film is certainly a mixed bag and has its share of strengths and weaknesses. For me, the film sort of sets itself up for failure as it seems to constantly try to get out of the very long shadow cast by a certain razor gloved nightmare man. Its not to say that this is a rip-off of that film series, however its hard not to draw comparisons by its very premise. Thus I feel like it never really finds its own voice. The other issue is the film really could have used a tighter focus narrative wise. Cokeliss never really fleshes the story out or the rules of this dream world,  unlike its American counter-part Elm Street. I think what makes this film a stand-out is its aptly surreal visual style. Using amazing lighting, off-kilter and inventive camera work and loads of fever-dream atmosphere, Dream Demon really is a haunting and beautiful looking film. And, even in the non-dream scenes have a very strange vibe to them. I also liked how they used this undercurrent of sexual repression with Diana which helped fuel this Baker-esque nightmare world of dark desires. Another point in this films column is just how incredible the practical gore effects and make-up's are. Its so wonderfully gooey, gross-out chunky and vomit inducing, everything you`d want out of an '80's splatter film. It reminded me a lot in that respect to say Bad Taste (1987). Demon has a surprisingly rich cast that includes solid performance by Kathleen Wilhoite of Road House (1989) fame and of course Timothy Spall, best known for portraying Wormtail in the mega-successful Harry Potter film series.  Spall gives a wonderfully manic and fittingly over-the-top turn that helps make this a stand-out feature. Jemma Redgrave is also great at giving some creditably to a fun but admittedly silly plot. Redgrave has a natural ease and beauty but, I also very much bought her variability and innocents.  Overall, I think Dream Demon is a very ambitious film that delivers on the surreal and the horrific, yet feels like it lacks a bit in the story department. Still, I think its just interesting and nuts enough to keep one entertained despite its issues. Honestly, its worth it alone for the zany gore effects and Spall as a character maybe greaser than Wormtail.

The new transfer is outstanding and really highlights the element of the film that is the strongest, that being the visuals. Faces look natural and colors look crisp and truly help the gorgeous gore pop. Darkly lit scenes seem to benefit most from this new print. Sound wise is also great and highlight Bill Nelsons wonderful strange and dark score. Dialogue comes through crystal clear with no background hiss or noise. Arrow packs in over TWO HOURS of extras and, as always they are wonderfully entertaining. I broke down the cast/crew interviews as followed:

Harry Cokeliss and producer Paul Webster do a great job at explaining the how's and why's of the film and it was really interesting to hear their stories. Arrow always does a fine job at getting lively and engrossing interviews which help shed a lot of light onto the film. In fact I found that after watching these interviews then re-watching the film (with selected commentary) I couldn't help but like it more the second time. The actors are also a nice addition and Arrow managed to get all the main players as well as Nelson who does an amazing job on the score.  The film does have a scene selected commentary by Cokeliss and Webster. The real cherry is the newly filmed documentary titles Foundation of Nightmare: The Making of Dream Demon (26 minutes) which features new interviews with cast and crew. Rounding out the features is a trailer, photo gallery and the theatrical cut of the film.

Its a dream no longer -Arrow Video delivers the goods on a British horror gem!
Posted by The Video Attic at 9:56 AM