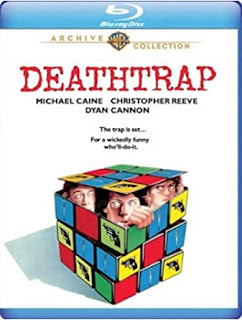 Sidney Lumet has been some of marveling movie goers ever since his feature film debut (if you dont count his made-for-television film) of 12 Angry Men (1957). But, it was really throughout the '70's with hits like Network (1976), Serpico (1973), Dog Day Afternoon (1975) and Murder on the Orient Express (1974) that he truly found his voice and style. Deathtrap (1982) follows a legendary murder/thriller playwright Sidney Bruhl (Michael Caine) as he suffers his fourth major flop in a row. Enter Clifford Anderson (Christopher Reeve) a young playwright with a manuscript possibly worth killing for? Twists and turns abound in this brilliant film based on the play by Ira Levin.  When I think of the perfect marriage between a first-rate director, a Oscar nominated screenwriter and a wonderful cast, Deathtrap is among the films that come to mind.

Lumet cleverly crafts a darkly funny film that manages to stick the landing with its multiple twists. Lumet brings a lot of charm but also dry sardonic wit and screenwriter Jay Presson Allen (who wrote the vastly underrated Marine for Alfred Hitchcock) brings layers, intrigue and wit which never feels convoluted. The film feels stagey but since its in the context of, and based on a stage play, it seems actually fitting. The pace is almost break neck with never a dull moment or filler scene to be had. Allen follows the strict rule of, if its not advancing the plot, it doesn't need to be in the film. This film has a great deal of Meta humor which is handled well without beating the audience over the head. Again, it comes back to Allen and Lumet knowing exactly where the line of over-the-top is and just narrowly skirts it. You of course cannot talk about the brilliance of Deathtrap without talking about the acting that gives it life. Reeve's and Caine are really in the top of their respected games. Both veteran actors turn in a well rounded and at times intense performance, yet, surprisingly it never gets hammy. Dyan Cannon also brings a funny yet emotionally vulnerable and sympathetic turn as Sidney's wife Myra. And, of course how can you forget Irene Worth who portrays the hooky German physic Helga. Worth's performance is the only one that feels a bit hokey but its so much fun i'll allow it anyways. You combined all this with a truly electric score by Oscar winning composer Johnny Mandel a expertly detailed production design by Oscar winner Tony Walton and snappy editing by Jack Fitzstephens you have a murder-mystery dark comedy that is a winner. I left a lot of the plot vague because it really does hang largely on its fun plot twists. If you liked the recent film Knives Out (2019) and are craving more of that ilk, I certainly highly recommend this film.

Warner Archives gives fans of this film a brand-new transfer worth of Lumet's genius. Colors are crisp and small details in the set truly come to life. Faces have a nice natural look and of course the film has not a speck of dirt or artifacts. This disc also features a robust soundtrack which showcases its wonderful score. Dialogue also comes through with a nice crisp clarity. No extras are included on this release.