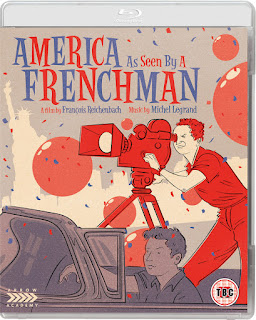 
Francois Reichenbach is one of those directors that helped pioneer French New Wave but sadly, does not get the attention as say, Goddard or Francois Truffaut. Thanks to Arrow Academy we get a brand-new transfer of his film  America as Seen by a Frenchman (1960). Part documentary part travel log, Reichenbach travels a crossed the US highlighting some uniquely American activities.

At a brisk ninety minutes the America is basically a collection of home movies (with some obviously scripted moments) but, what keeps it from being just boring travel-log is two things: While Reichenbach never offers his opinion on the material he just inject personality and even some sass in his narration. At times he picks apart some hypocritical aspects, but does so in a lighthearted and sardonic tone.  For example he talks about how no other country respects the institute of marriage more, yet has quickie car park ceremonies. The second is, this is a fascinating look at '60's (or late '50s depending on when it was filmed) America. Of course, everything is raw and real and, if you love kitsch from this era, this is a must watch. Some of the highlights of this documentary are showcasing a prison rodeo, taking a look at a young Disney Land (which opened in '55) and a brief exploration of the art of strip tease. Everything is kept very light, tone wise which I thought was the right choice. It veers slightly when they discuss crime among youth but even still it never gets too bleak. I was endlessly engrossed by the different aspects of the film, not so much by the content (which most people would be very familiar with) but with how differently things are done at the time of filming versus today. To young eyes it really does offer a slice of a America that no longer exists and therefore makes it as an invaluable document. If I would have to say one major failing of this film its that Reichenbach never interviews anyone. Yes, there is something to be said about just filming the reality and letting it play out and believe me I think thats a valid documentary framework. But, I think in this case it would have added a personal touch. I got a very detached feeling more akin to a nature documentary rather than one that deals with living breathing people and and their ways of life at this point in time. It also would have been very interesting if there was some kind of cultural exchange between the subjects and the filmmakers. If you, like myself love kitsch and everything '50's-60's and Americana, this is a very worth while watch from a underrated director. 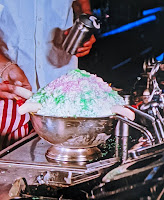 For a film that turned sixty this year, America as Seen by a Frenchman looks AMAZING! Colors pop out and I was impressed by the lack of any artifacts, scratches etc. I dont know for sure but i`d wager this is a 2k scan. Clearly a lot of love and resources went into restoring this footage and its one of the reasons why I adore Arrow. The sound is great as well and the audio comes through clean and clear with no hiss or distortion. The extras include a great 23 minute video essay by famed author and critic Philip Kemp. Kemp does a great job at giving us background on the filmmaker and some great context for the documentary. It was very enlightening and entertaining. Overall, while I had a few issues, this is a engrossing documentary and Arrow Academy gives it the treatment is deserves!