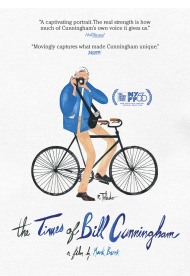 Fashion photography is a subject that I am afraid I know very little about. However, I always I love to learn things that are out of my wheelhouse. This is why, I thought it would be interesting to take a break from my typical films I review on here. As always, I love all genres which makes one, I think a very well rounded cinema lover and person. Narrated by Sarah Jessica Parker and using a vintage interview, the film tells the story of legendary photographer and journalist Bill Cunningham. From getting his start designing hats for people like Joan Crawford to his fashion column and documenting historical fashion icons like Diana Vreeland and his important photographs documenting the history of the Gay Pride Parades in New York and so fourth.

Bill Cunningham is such a character and so, a documentary about him seems incredibly fitting. Cunningham himself is just a happy and electrifying personality and his interview with Mark Bozek is absolutely spellbinding. Bozek doesn't interview anybody else and I think that is incredible smart. It allows you to feel like your taking this journey with Cunningham with a narrative flow by Parker. The documentary is laid out in such a way as its easy for novice like myself to get invested in its subject but it also rewards those who know fashion and fashion photography. And, for me thats the mark of a brilliant documentary, one that doesn't alienate its subject but also doesn't dumb it down for people in the know. If I would mention one complaint it would be that I thought some of the pictures could have used more context, like dates locations etc. Very minor though. There is another Cunningham documentary entitled Bill Cunningham: New York which I hope to check out soon. If you are not a fashion fan, you will no doubt love this documentary and if you are not I still think you might find this interesting. The film is a brisk hour and fifteen minutes long and its so engrossing it flies by.

The film is available on DVD and is worth checking out!