The Obliteration of the Chicken/Disco Graveyard Two Shorts by Izzy Lee.


Izzy Lee is a filmmaker whose work I've gotten to know over the years and, its been a rare treat to see her mature in her craft. The short films she writes and directs always have a sense of dark fun but also injects her own biting social satire. She is able to tackle thought provoking subject matter without ever coming off shallow or, worst yet preachy. I was lucky enough to get to watch and review her latest film Disco Graveyard (2020) but also re-watch and review The Obliteration of the Chicken (2019). In a directors statement Lee said "Disco Graveyard is a spiritual sequel to The Obliteration of the Chicken, and the most positive film I've ever made."   Lets take a deep weird and wonderful dive into two short films from this exciting filmmaker. 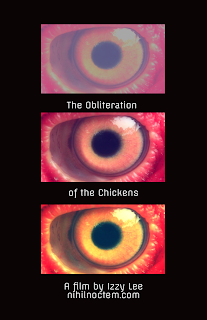 The Obliteration of the Chicken (2019)
"The abyss is stupid"

Used with one-hundred percent stock footage this mockumentary details the meaningless struggle of an uncaring universe.  Chicken is brilliantly narrated by author Bracken MacLeod (Stranded, Mountain Home) in his best Herzog impression, which sets the tone for this short. From the voice-over impression, 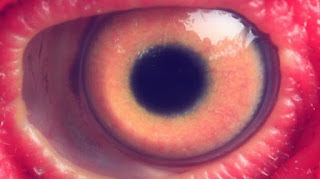 Lee is doing a wonderfully hilarious send up of a Herzog documentary and I'm living for it. The stock footage is used with a lot of skill and edited to perfection by Michael Epstein. Even if you are not familiar with Herzog's documentaries (which you really should) its still a fun, nihilistic spiral and exposes the truth of why chickens are gross horrible creatures but also that the universal doesnt give two shits about us. Feel good stuff!   Once again Lee is able to get away with dark subject matter because she does it in a uproariously funny matter. This one had me laughing out loud. 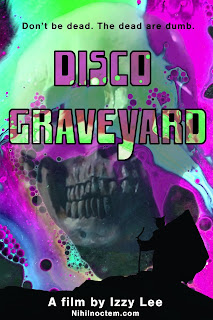 Wow, what a tell. Disco Graveyard tells us why the dead are dumb and we should live and be our authentic weird-selves.  Disco is a clever deconstruction of cheesy infomercials, but with a  decidedly surreal tone. 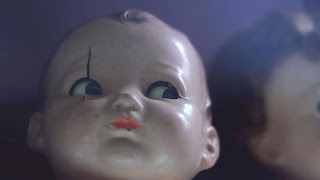 In her statement Izzy says this is her most positive film to date and, yeah, its dark but has a really cool uplifting message. Times are touch and in a strange pandemic 'new-normal' I think we need a message like, be true to yourself and fly that freak flag high. Just like Chicken, Lee seamlessly uses stock-footage which is a cool way to explore the medium. It also works as it fits the construct of a late night ad, but this time instead of selling you shitty creams, Lee is selling you some delightfully morbid yet at the same time uplifting message. What I love about Lee is she can be funny and serious, without going over board on either. Its a difficult balancing act to pull off she sticks the landing. Put on that horse mask and get weird with this funky and fun film. 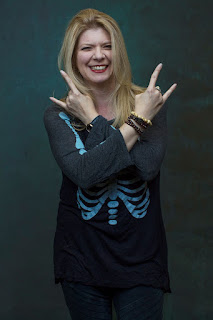