Retro Rewind: Out of the Past (1947) Warner Archives 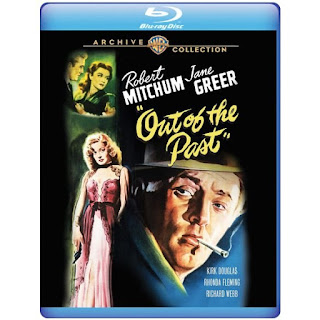 So, when anybody asks me what are the two essential Film Noir's are, that's easy, Billy Wilder's Double Indemnity (1944) and Jacques Tourneur's Out of the Past (1947). Both not only perfectly embody the brooding-film style but amazing storytelling as well. The latter has been released by Warner Archives in stunning HD.  Based on the novel of the same name by Daniel Mainwaring, Out of the Past tells the story of Jeff (Robert Mitchum) is a seemingly normal guy that runs a gas station in a tiny town. He has a girlfriend named Ann (Virginia Huston) and things seem to be going quite well for him. That is until a mysterious stranger blows into town threatening his cozy life. Jacques Tourneur is probably best remembered for the psycho-sexual black and white horror master piece Cat People (1942) and of course this stark Noir. Tourneur along with screenwriter Daniel Mainwaring weaves a compelling plot, great characters along with a few solid twists that keep it wildly engaging. The film is filled to the brim with troupes like the hard boiled detective, the femme fatale and of course a lot of double crossing. If you think these elements are cliched, its worth noting that at the time, they were not.

You cannot talk about a film like Out of the Past and not mention just how visually stunning it is. Stark black and white photography steeped in the German expressionist style of the silent's, Past is a beautifully shot film. Cinematographer Nicholas Musuraca gives the film a haunting and brooding presents that would be duplicated but never copied. Of course the film is anchored by its amazing cast. Mitchum for me is the archetypal hard-living, smooth talking man with a checkered past. Robert gives what I think is his best performance and gives a enthralling and heartbreaking turn as the hapless detective. You truly root for his character and we as the audience want to see him have a quiet life, but alas we know that is not in the cards. Supporting actor Kirk Douglas gives a fun and I think understated turn as the vile thug Whit. Douglas relishes the bad guy role but never quite crosses the line into hammy over-acting.  And, of course what is a Noir without its women characters. Greer nearly burns down the set with her fiery presents and smoldering good looks. But, she is also incredible talented and gives bad-girl Kathie sub-text not found on the page. Yes, shes the worst, but Greer brings some much needed pathos to the role. In my mind she is one of the best femme fatales captured on celluloid. Virginia Huston makes the best Ann, though admittedly its a dull role. Out of the Past also features possibly the most underrated score by Roy Webb (Notorious, Bringing Up Baby).  If you are new to the film-noir style this is certainly a good jumping off point as it is filled to the brim with all the troupes that the genre is known for. Out of the Past is sleek, stylish engaging with some stunning performances.

Warner Archives transfer is stunning and truly brings back to life the the haunting visual style that makes this a stand out. The contrast is on point and small details in the production design really stands out. Artifacts and dirt have been removed and what we are left with is a clean clear picture. Sound wise is also great with a nice healthy mono track. Dialogue comes through clear and features no background hiss. The extras include a running length audio commentary track by film historian James Ursini.