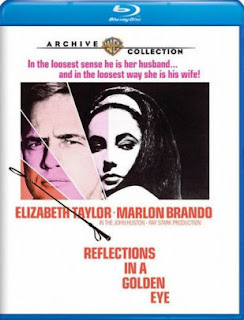 Please note: I will be reviewing the golden hued version, which is Huston's preferred version.

The sixties had seen the end of the Golden Age of Hollywood and also the end of the Production Code which was replaced by the MPAA in '68. For the most part gone were big budget historical epics in favor for grounded youth/counter-culture films. It would usher in an exciting and rebellious time for films leading into the '70's with the likes of Lucas, DePalma, Scorsese and Coppola.  Reflections is a film that feels like it has one foot in old traditional Hollywood melodrama and another in a modern era. The story follows Major Penderton (Marlon Brando) a tightly wound man and his free-spirited adulterous wife Leonora (Elizabeth Taylor).

Reflections in a Golden Eye is a truly strange film, especially one made by a major studio. Its an oft-kilter little slice of  South Gothic melodrama that has enough pent up sexuality to make even the great Tenseness Williams himself blush. Every character is either insane, sleazy, deeply repressed or a combination of all three.  I mentioned that at this point in time the Production Code was all but disbanded which allows Huston to broach some for the time taboo themes, such as. reversed gender roles, homosexuality, BDSM and adultery to name a few. Though I was say that some of these topics arent explored in any detail, but rather is strongly suggested in hints and subtext. It wouldnt be another decade until Hollywood could really explore these themes in depth. Legendary director John Huston delivers a fantastically directed film and even though things get weird, he somehow manages to keep everything from going completely off the rails. Also I think Huston was one of the few directors able to handle its heavy hitting, yet notoriously difficult male lead. And speaking of which....Brando gives a very shall we say uneven performance. We get glimpses of brilliance from his glory days but its overall hammy and comes off like a sort of self-parody of other better performances. Taylor does a serviceable if not also a bit hamming herself. She is basically doing the same shtick as Cat on a Hot Tin Roof or any other Southern drama shes been in. Its not to suggest they are bad in their respective roles, just we've seen this characterization in other films. Its worth mentioning that Robert Forster makes his film debut in Reflection. Besides its odd-ball tone and acting, Reflection is striking from a visual stand point as it was shot entirely with a golden hue. This gives everything a hot almost oppressive feeling. Its worth noting that the studio hated this and forced a colored print to be swapped out only a week into its theatrical run. Huston had always preferred this version of the film and I can understand why, as it really does add to the palpable mood. The film isnt exactly a master-piece as the story arches never feel like they reach anything satisfying and I think the story could have been better developed. Yet, its so endearing as its a campy slice of Gothic Southern Americana that revels in its perversions and is anchored by some fun yet questionable performances but its leads.   This is one of those gems that never really gets talked about like it should. I only hope that this new release will boost the films cult status. Its truly a oddity of a studio film made at a time when a film of this ilk could not only be made but feature a high profile cast, a legendary director and a decent sized budget.

Warner Archives has set their bar incredible high when it comes to HD picture transfers and WOW Reflections looks stunning. The images are crisp and details come through with amazing clarity. Both the Golden Hue and Regular Color version are included on two separate disc's. Its great to have the option though I cant imagine wanted to watch it any other way than what the director envisioned. Sound is also great with a healthy 2.0 Mono track. Dialogue is clear and the score also comes through nicely. Bonus features include a vintage featurette.

If you love campy, over rot, sexually perverse South-Gothic odd-ball cinema Reflections in a Golden Eye is a Must-Own!