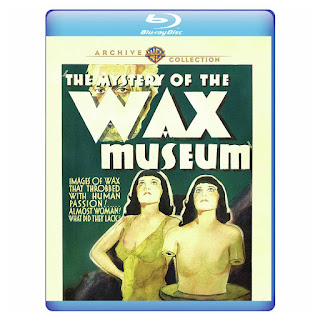 In terms of neglected horror sub genres, the bodies in wax is my favorite. Also, I think there is something extra creepy about lifeless wax faces with their dead eyes. So, if you want some good old fashioned nightmare fuel Warner Archives has the release for you! A plucky reporter named Florence (Glenda Farell) investigates murders and body disappearances which leads her to a strange wax museum. I was actually more familiar with the remake, re-titled House of Wax from 1953 which was the breakout horror film for Vincent Price. But unlike that film, Mystery was made just before the enforced Production Code. Therefore the film gets away with some naughty dialogue and overt drug references to spice things up. The film also focuses on a reporter full of moxie and her discovering the dreaded secrets of the wax museum. This makes for a better set-up than in House of Wax, as it gives the female lead more agency in the story. I also love the palpable atmosphere the film conjures up and the two strip color drips the film in a strange look and feel. And I dare you not to get creeper out by the melting faces from the beginning of the film. Morbid humor also abounds and overall the film has a bit of a playful tone. Having said that I feel like House manages to stream line the major plot points better and therefore makes for a more engaging film overall. And not that I dont love Atwill, its hard to compete with Vincent Price. Even though I think the Price version is slightly better, Mystery has a lot going for it as well such as, spooky-charm, a great strong female lead, weird set pieces with a dash of sex and drugs, that was sadly erased from its remake counter-part. It also features the lovely and talented Fay Wray and Lionel Atwill in his sinister best. Curtiz along with two-time Oscar winning cinematographer Ray Renanhan gives the film a haunting visual style that surpasses the remake and is clearly influenced by German expressionism. A fun film which always makes it on my October watch list.

Once considered lost, the film surfaced over five decades ago and in 2020 it has been lovely restored by the UCLA Film and Television with funds provided by the George Lucas Foundation. The film has been given a brand new digital scrubbing with the removal of artifacts, dirt and scratches. Its easy to see that countless hours of pain staking work went into making this film look pristine. The sound is great as well with no no background noise distortion and dialogue is strong. Warner also has a host of great features which includes.

Remembering Fay Wray (18mins) Daughter of Wray provides a loving and interesting insight into the iconic scream queen. It also features not one but two feature length commentaries, one by Alan Rode and the second by historian Scott MacQueen. Rounding out the features is a nice before and after restoration featurette.

If you are a horror fan, especially that of the pre-Code variety this is a MUST OWN!