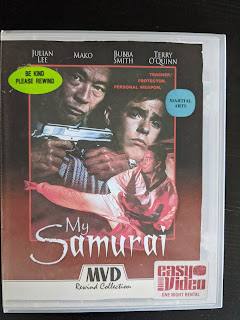 So, confession time. Though horror is my favorite genre I just love cinema in general, especially of the cheesy-variety. And, give me a good hokey action flick and that makes for a fun, sometimes brain melting evening. My Samurai from 1992 is sadly not as fun as it seems like it would be. A boy named Peter (John Kallo) witnesses a gang murder. Now, a group of generic thugs will stop at nothing to hunt him down. Aided by his martial arts teacher Young Park (Julian Lee) and Deborah (Lynne Hart) they try and save Peter and themselves. Oh boy, My Samurai is really something. The set-up is familiar simple, yet the film lacks focus and falls way back on action troupes not to mention a host of plot holes. It tries to give Peter a story arch but it just comes off weak and shallow. It also has a very weird pacing with random things happening that doesnt further the story. For example, about forty minutes into the film the trio fight a street gang of big haired Mad Max rejects who chew every bit of scenery they can.  Why? Because they need to pad out the film and maybe thought the film could use an extra action scene.

Bad? Yes but I think the worst sin this film commits is its main stars Julian Lee and John Kallo lack personality. Lee gives a deadpan turn as Young Park and it seems like he is sleep walking throughout. Kallo doesn't fair much better. It almost seems like the kid is reading off cue cards, his whole performance comes off robotic. Director Fred Dresch doesnt seem to understand that, what makes cheesy action films work is that actors like Bruce Willis, Stallone and Schwarzenegger have charisma. And, as hammy as some of the movies they are in, they can carry it along because they ooze charm and likability. This is something that is sorely lacking from all the actors involved. All expect for the great Terry O'Quinn who is sadly not in the film very much. I will say I did like how the film has some silly moments that make it almost bearable. Depending on how much you enjoy bad movies you might enjoy Samurai but its just so bland and Meh. Honestly its not very memorable and again, the pacing and story issues weigh it way down like a stone. I doesnt have the fun high energy that you want in an action film and it feels like everyone from the director to the actions are just going through the motions.

Overall the picture is good the skin tones look natural and any scratches or artifacts have been cleaned up for the most part. There are some noticeable film wear in the latter portion of the film.
I did notice some grain and noise but I dont think it was bad enough to detract from the film entirely. I cannot say the same sadly, about the sound. The Sound is actually not very good. Allow me to explain. Typically when I review a film during the day I have headphones on and Samurai had some much hissing and background noise that its wildly distracting. I wasnt sure if this was just me, so I looked at a review from Blu-Ray.com and the reviewer mentioned the same issue. Its rare when I watch a film and it has this kind of issue, and also very odd since other MVD titles have had solid audio. Its a shame because it makes for a unpleasant viewing experience. I ended up turning on the subtitles.  Like most MVD Rewind titles this has a host of new-bonus features. This includes a slew of new interviews with the actors of the film. I will say these are fairly lengthy for featurettes and MVD does not phone it in when it comes to extras. Rounding out the extras are two photo galleries a trailer and a fold out poster. Package wise is very much on point with a retro VHS box design which is a lot of fun.
Posted by The Video Attic at 11:20 AM