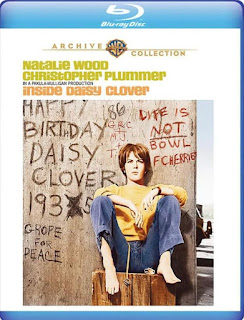 Natalie Wood was a star that burned bright but sadly went out before her time. She was one of those rare child actors that was not only able to make it as an adult but, she thrived and only got better with age. Last year Warner Archive re-released her the screwball farce Penelope (1966) and this year we get Inside Daisy Clover (1965). Daisy (Natalie Wood) is a fifteen-year old kid growing up in '30's California with dreams of being a big star. But will the Hollywood machine chew her up and spit her out? Mulligan is one of those directors that I feel like doesnt get the credit he deserves when we talk about great cinema in post-Golden Age Hollywood. He could work in big powerhouse films like To Kill a Mockingbird as well screwball fun fare like The Rat Race but also do well in small moody pieces like the woefully under-loved horror film The Other and the hybrid western thriller The Stalking Moon (also released by Warner Archives).

Inside Daisy Clover was a flop with both critics and at the box office yet, has thankfully found a loyal cult following. The film is a bright-colored film about Dream Land and the fast paced first act, as Daisy is swept up into stardom almost plays out like a actual 30s-40s film and then Mulligan quickly pulls the rug from under us, and, underneath is a harrowing look at mental health, addiction, and the true price of stardom. The film is serious but thankfully is covered in a thick coating of wonderful '60's eta camp with some of its over-the-top dramatic performances, its coded queer subplot and a who's-who of cult icons. Speaking of which, Wood plays a fifteen-year old but in reality was almost thirty when she played Ms. Clover. And, while, if I'm being honest it is a bit jarring at first, its a testament to her range that you buy it. She gives a painfully honest turn and one cant help but wonder if she channeled some of  her real life angst of child stardom and a tough stage mother. Not only is it an Oscar worthy performance but I think its may be my favorite of hers. Redford also does a fine job at Wade, a bisexual actor struggling with his own demons. Daisy also has a dream supporting cast including Ruth Gordon as Daisy's kooky mother who creates magic within her limited screen time. Its hard to believe that to studio didnt want Gordon and indeed it was Wood who fought for her. She would later win an Oscar for her role as the nosy neighbor Minnie in Rosemary's Baby (1968).

The cast also includes Roddy McDowell and of course a very young Christopher Plumber in a icy and calculated role. This really has one of these special group of actors that few films manage to assemble. Not one actor tries to steal the scene and everyone seems to feed off of each other quite well. The film is ground breaking for exploring homosexuality, or bisexuality (which was changed from the book at Redfords request). Its only after the disbanding of the Hays Code that even this small reference to Wades sexuality could be explored. Its also ironic since you have the openly gay Roddy McDowell in a supporting role and gay icon (though not gay) Ruth Gordon. Its at least shows that Hollywood was willing to take a risk on the "taboo" subject matter.  Though it failed to connect with audiences of its day, I think the story is timeless and showcases so many talented people in front of and behind the camera. One of which was Oscar winning DP Charles Lang who is one of the best Golden Age camera man who could have acted as a technical advisor as he was very much around during the period the film is set.

The new HD transfer looks great and the colors really pop as well as showcases Charles Lang's amazing cinematography as well as its rich production design. Skin tones look natural and any scratches or artifacts have been removed. The sound is also great with crisp clear dialogue and since this film is very musical, it highlights the soundtrack very well. The features include a short cartoon War and Pieces and a trailer.

If you love big dramatic Hollywood movies about show business with one of the brightest stars of her generation, Inside Daisy Clover is a must buy!