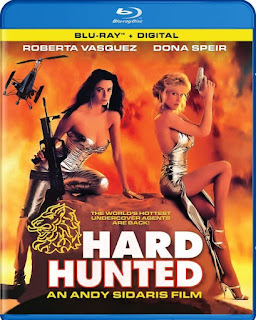 I smell...tanning lotion and gun powder in the air, which means only one thing, I'm trapped in another Andy Sidaris fantasy of action and pretty people in various stages of undress. A ruthless band of international arms dealers will do whatever it takes to get back a nuclear relay cleverly hidden in a jade Buddha statue. Now its up to the ladies of LETHAL to keep the world safe. Meanwhile team member Donna (Dora Speir) loses her memory and doesn't realize the danger she is in. Will she re-gain her memory and can the ladies stop the relay from getting into the wrong hands? Andy's films are very much the same plot just re-worked slightly but the road map usually goes: arms dealer steals some weapon, LETHAL is called in to fight the bad guy and his henchmen, probably some double crossing and of course mild violence, explosions, sex and nudity, always in a tropical setting. But, you know I dont mind this, because these are fun movies to turn off your brain and just enjoy. I always see these movies like live action adult-geared cartoons, because of just how whacky and often unrealistic at times.

Indeed Sidaris must view these as such, for example a pair of bad guys are carrying around guns marked with ACME a fictional company used in various Warner Brother cartoon shorts. Hard Hunted is paced incredible well and the plot, of what there is, moves along nicely. Typical narrative holes abound as does silly and clunky dialogue and shall we say questionable acting. There are some really cool elements worked in this film like Donna losing her memory and the wonderfully cheesy coded messages delivered via a radio show. It also includes some great action set pieces and its always fun to see the legendary Al Leong kicking some serious ass. I say this a lot in my reviews for Sidaris but films are I think an acquired taste and seems to be best enjoyed if you like low-budget, high energy schlock. They are basically junk-food cinema filled with tropical locales, beautiful people and loads of action. And, as I said Andy doesn't take these films seriously, he knew they were mindless films and it feels like he`s in on the joke.

Mill Creek has been doing a great job with their HD transfers and Hard Hunted looks great! The outdoor scenes look crisp and clear and vibrant. Facial features look natural and thankfully nothing has that washed out look. The sound is great as well with a healthy mono track. There are a lot of music and sound effects and booms that sound great through a speaker system. Dialogue such as it is, also comes through nicely.  Like the other Andy releases this includes a director intro and running commentary track. The features also include trailers and a behind the scenes featurette.