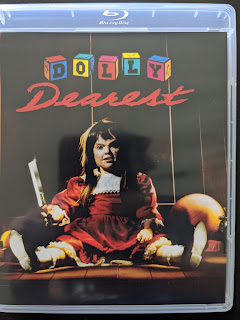 I first discovered Dolly Dearest on cable television and even back then, with my limited film knowledge I thought this was kind of a dud. But I always wondered how it would hold up through my now jaded mindset. Would it be a so-bad-its enjoyable bit of schlock or is it just terrible? Well I was excited and nervous to find out thanks to Vinegar Syndrome re-releasing this early '90's Child's Play knock off on HD. Elliot (Sam Bottoms) an American doll maker moves himself and his family to Mexico to start making a new line of dolls called Dolly Dearest. But wouldn't you know it the factory is next to a ancient graveyard and an evil spirit finds its way into a dolls. Jessica (Candance Hutson) is gifted one such doll and of course horror and death ensues. I was all set for a miserable time as this film is pretty notoriously bad, but you know what, its fun. The plot feels like a patchwork of other better films stitched together, not only Childs Play but since it deals with possession we gets nods to The Omen (there is a car freak out scene with Jessica that mirrors Damien as he nears a church), with some Bad Seed  and The Exorcist thrown in for good measure. I actually love rip-off movies so this didn't bother me in fact it made it more endearing. I say nods but if im being honest its a wonder they didn't get sued.

What also struck me is that Marie directs the film with no winks to the audience and everything is played serious yet it also feels like she is having a great deal of fun with the horror troupes. I was also surprised that the film has a very interesting surreal, nightmarish vibe to it which is way more than you might expected from a killer doll outing. The entire scene with the housekeeper and her demise is extremely well crafted. Having her death take place in a creepy cobwebbed doll factory is cliched but effective none the less. I said the film takes itself serious but it does have some nice moments of dark humor, which makes this feel like a long lost episode of Tales from the Crypt (minus the brilliant writing of course). Obviously the film has a whole host of issues ranging from its fairly predictable script, whacky dialogue not to mention the way it stereotypes Mexican culture and its people. Speaking of which, Rip Torn gives no doubt his worst performance as a Mexican man, with an accent that comes and goes at any given time. I think at the end he just gives up entirely. Its truly a sight to behold.  Denise Crosby best known to horror fans as Rachel Creed or Sci-Fi fans as Lt Tasha Yar gives a good but wildly uneven role but Crosby has a warm presents that helps carry it along despite the fact. And honestly all the actors are doing the best with some of the cringe-worthy lines they have to utter. Bad? No doubt. Its laughably corny, cliched with some performances that are The Room level. And yet, damned if I didn't find the entire thing decently paced and enjoyable in a so-bad-its sublime. Its the kind of fun rotten movie that you can put on and totally shut your brain off.

The film looks great having been sourced from the original 35mm interpositives. This new 2k scan really helps showcase the better-than-expected visual style. Night scenes really help highlight the boost in clarity and the details in the production design as well as scenes shot in Mexico. The sound is also well done with a crisp clear Mono track. Dialogue such as it is, comes in crystal clear as well as the underrated score by Mark Snow (The X-Files, Smallville). As always we get some fun extras. This includes two interviews, one with Denise Crosby and Ed Gale.  I was delighted to see Denise Crosby was interviewed for this. She speaks very warmly of the making of the film and the fact that she embraces it makes me love her even more. Also interviewed is Ed Gale the actor who played the doll in scenes. Horror fans also know he was Chucky in scenes for Childs Play and its great to get a rare interview with him. Vinegar Syndrome has been releasing more '90's era horror films and that makes me happy as its a decade that hasnt gotten a lot of love as far as releases goes unlike the '80's. Seeing how I was a '90's child movies like Dolly Dearest brings back a lot of memories. Worth owning!