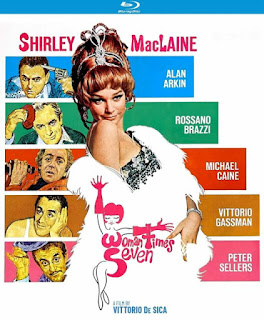 Vittorio De Sica best known for his Italian neorealism masterpieces like Umberto D (1952) and The Bicycle Thieves (1948) comes this screwy sex comedy. From attention seeking wives to widows to a custom dress to kill Woman Time Seven (1967) tells seven non-connected stories all starring Shirley MacLaine as different characters all against the beautiful and lavish Paris backdrop. Like any anthology film some segments work better than others. Some I found so brilliant and funny and others felt like they didnt have the same punch. I was excited to see Sellers in the cast but he is woefully under-used in this. Overall though I think there is more hit than misses and even the less engaging segments still have this wonderful sardonic and sometimes dark sense of humor which I adore. 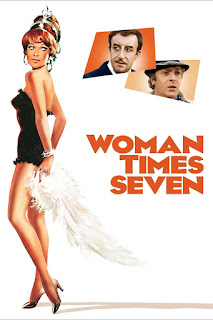 Woman also has a great look to it. The gorgeous backdrop gives the film a grand and romantic scope and the legendary French cinematographer Christian Matras brings a polish to the entire affair with his skillful and inventive camera work. Being filmed in the '60's add's a delicious layer of kitsch. If you are new to the work of Vittorio De Sica, Woman makes a nice place to start. The film is not only very accessible but you get to soak up his trademark style. Also its largely American cast might ease some into Sica's world. Speaking of, the big draw for me was the incredible collection of stars. Headlining the film is Shirley MacLaine, and she is tasked to basically not only carry the entire film but also portray seven different characters. With grace, beauty and talent she is more than up to the task. MacLaine simple dazzles in Vittorio's anthology. Certain things she does with looks and body movement help make each character alive and wholly unique.  Of course, she has a lot of great co-stars including Peter Sellers,Michael Caine, Rossano Brazzi and a young Alan Arkin in a incredibly funny and morbid segment. While some of the segments may not land, overall the film finds a tonal harmony that is very tricky with anthologies and its tight direction and writing carries it far.   Cheeky, wry and over-the-top funny, fans of sixties Euro comedies will be delighted by this release!

Kino Classics provides a nicely done new HD restoration which brings this film alive in all its '60's color-filled glory. The image is bright and clear and highlights Matras's photography and the beauty of the locations. Kino never sleeps on the job when it comes to cleaning up and their films and dirt and artifacts have been scrubbed, giving a very vibrate look. Similar we are treated to a great 2.0 Mono which is clear and dialogue comes through very well. The film features an audio commentary by film historian Kat Ellinger. Ellinger takes us through the film and is clearly not only very entertaining to listen to but, she knows her stuff. I found it very informative and its no wonder she has done so many commentaries in the past. Truly a treat to compliment this film. Rounding out the features is a series of Trailers.