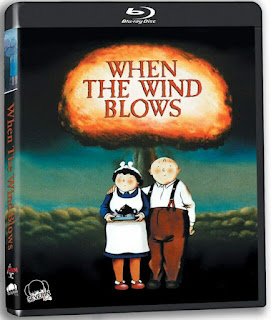 When the Wind Blows (1986)  is a movie that I had never seen but it carried with it a reputation for being a rather disturbing animated movie. To my shock and delight Severin has re-released this film on Blu Ray through their Severin's Kids label.  A ordinary elderly British couple named Jim (John Mills) and Hilda (Peggy Ashcroft) manage to survive a nuclear blast. They emerge from their make shift bunker only to find they survived but have bigger issues to deal with. Jimmy Murakami has had such an interesting career directing everything from Corman's Battle Beyond the Stars (1980) to the charming TV film The Snowman (1982) based on the beloved childrens book to the psychedelic epic Heavy Metal (1981) all within the span of a few years. Later in his career he focused on children's entertainment however his 1986 animated film is...um. not really meant for the kiddies.  Subtly blending live-action and animation When the Wind Blows came out at the height of Cold-War paranoia in the tradition of similar films like WarGames (1983), Threads (1984, also available from Severn) etc. While all of those movies are unsettling I think WTWB is even more so due to it being wrapped in a cute even charming animated coating. I think it puts ones guard down and then WHAM the carpet is pulled down from under you. We get taken down a hellish spiral as we have to witness the suffering of two sweet characters. I think it goes without saying that there are some truly horrific and disturbing scenes including the initial blast and the devastating fall out. Murakami spares none of the horror as we see rumbled and burnt out streets and houses and of course death and decay.

Believe it or not there is some dark satirical humor nestled within the film. I cant help but feel that Jimmy is taking a bleak but playful jab at polite stiff-upper-lip British society. Head of the household Jim starts out as a pro-active character but when shit literally hits the fan he waves everything off. Meanwhile Hilda is more concerned about wanting to clean up and laments her dishes being broken etc. The fact that the couple aren't fully grasping the true horror of their situation and go about their lives as normal (or as normal as possible) seems to make it all the more unnerving to watch. Similar to The Snowman and Heavy Metal (never thought i`d mention those two in the same sentence) the animation has an incredible look and style that is very unique. The blending of animation and live action makes for a harrowing yet beautiful experience. Oh and did I mention that none other than David Bowie performs the title track? And Roger Waters of Pink Floyd fame provides the music for the bulk of the film. When the Wind Blows is a film that even after thirty plus years still remains as powerful as even, especially doing these troubling times.

Severin has unleashed a tragic and disturbing nuked out kids flick that needs to be seen to be believed.

The film looks incredible on HD and really showcases the talent behind the animation. When the Wind Blows also sports a nice Mono track and dialogue comes in clear and music really pops with this track. Like most Severin releases the extras really are the icing on the cake. This disc features not one but two documentaries, the first about director Jimmy Murakami and the second about the feature film which features rare interviews. The film itself has a running commentary with First Assistant Editor Joe Fordham and film Historian Nick Redman. We also get a lively interview with Raymond Briggs the writer/screenwriter of the film. Again, Briggs is a really exciting addition to disc. Rounding out the features is a vintage PSA on nuclear danger as well as an Isolated Music and Effects track and trailers. This is third entry into the Severins Kids line and there is a fun little surprise insert for the kiddos.

Above and beyond is the only way to describe this Severin release and makes a good double bill with Threads.