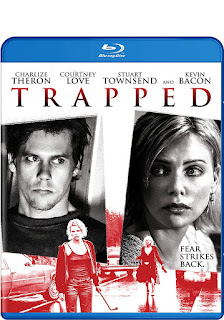 I'm a sucker for both good and bad early '00 thrillers so I was actually excited to Mill Creek's re-release of Trapped (2002). Will (Stuart Townsend) and Karen (Charlize Theron) are a rich couple with a little girl named Abby (Dakota Fanning). However Abby is kidnapped by Hickey (Kevin Bacon) and his henchman Marvin (Pruitt Taylor Vince). Seems that they, including his girlfriend Cheryl (Courtney Love) have a fool proof way of getting ransom from the wealthy parents. The only problem is they messed with the wrong mommy and daddy when its discovered more than just money is motivating the crime. Trapped is a thriller movie that is pretty much light on the thriller aspects. Its as by-the-numbers as you would expect and its honestly nothing that you havent seen before. What makes this a truly stand out film is the lead actors. Charlize Theron and Kevin Bacon turn in performances that are way too good for the material. They certainly dont phone in their roles and treat the material like A-list when its clearly C at best. The doe eyed child full of moxie that was Dakota Fanning in the late '90's-early '00's is also fascinating to watch. A lot of jokes have been made (especially on SNL) about her but she really was and is a great actor. Character actor Pruitt Taylor Vince is as always fun to watch in the role of the bad-guy and or weirdo. The actors are really the only reason to slog through this mish-mash and pretty standard kidnap/ransom movie. It feels like the film doesn't really get going until an hour into the film. Luis is clearly a solid director but the screenplay by Greg Illes doesn't add anything interesting to the genre and only kind of touches on class-division. Plot holes and gaps in logic also make this a frustrating watch. This was Greg's one and only screenwriting credit and thats probably for the best.  I wish I could say Trapped was a so-bad-its enjoyable film that was cheesy and over-the-top but its pretty forgettable expect for its excellent cast.

Mill Creek Entertainment has provided a nice looking Blu Ray. Skin tones are natural looking and even looks good even the films mostly muted color palate. Sound wise is a nice healthy 2.0 Mono track which utilizes the films decent sound design. Dialogue such as it is, comes through clear. No extras are included. For under ten bucks this movie is a good value if its something you feel like you`d want to own.