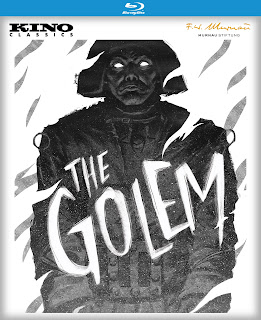 First a little context: A golem refers to a clay figure that is brought to life via magic to do the creators bidding. This is a traditional Jewish folklore that still crops up into pop culture.

The Golem from 1920 is not the first film on the subject in fact its actually the third to be made on the subject. Sadly the only one to survive completely. Both previous movies starred Paul Wegener as the titular hulking character. Rabi Loew (Albert Steinruck) creates a clay figure to help his Jewish brothers and sisters from persecution in 16th century Prague. Soon however the figure starts to become increasingly violent and harder to control. Being a lover for silent film, especially horror it was down right criminal that, prior to this release I had not seen The Golem. Now that Kino Classics has released a stunning 4k Blu Ray marking the films 100th anniversary, it seems like a very fitting time to delve into it.  Much like The Cabinet of Doctor Caligari Golem is a magical and engrossing film that hooks you from the very first set-piece. Visually this film is amazing and its German expressionist style (which was the template for the Film-Noir movement) and strange set design gives everything a very off-kilter and surreal vibe. The incredible destruction in the final act is so breathtaking in its construction and technical innovation that it boggles the mind that it was made a hundred years ago. Karl Freud was the DP on this and has an incredible resume. His DP work includes everything from Metropolis (1927), Dracula (1931), Key Largo (1948) as well as one-hundred and fifty episodes of the classic sitcom I Love Lucy. He even branched out into directing with impressive titles like The Mummy (1932), Mad Love (1935). His work here cements him as one of the most groundbreaking cinematographers of all time.

With it being steeped in mysticism and folklore it really gives the film a interesting culture filter that add's layers to an already compelling work of art. There is a real heart break that echoes throughout the film as Jewish oppression is a major theme, which casts haunting shadows of the Holocaust to come some two decades later. It certainly adds an uneasy feeling as you watch. Golem has very clear morals and its this, combined with its over-the-top natural helps gives it this wonderful dark fairy-tale like quality. I had often heard that this film and the myth in general was the blue-print for the Frankenstein's Monster mythos and its not hard to see why. In fact its easy to see how much inspiration gathered for Frankenstein (1931). For example there is a scene where a little child interacts with the Golem and I couldn't help draw a comparison to the scene with little Maria in Frankenstein. Also both creatures are big lumbering brutes but both have an strong emotional core. Whale also must have been greatly influenced by Freud and his German expressionistic style.  Paul Wegener not only co-directs the film but also plays the mythic creation. As stated above the actor was famous for the role and in fact in an earlier lost short film The Golem and the Dancer he plays a version of himself as an actor playing the golem. Talk about meta. Like Karloff, Wegener brings a humanity to the clay figure and it shines through the make-up. Rich in Jewish folklore and with a hypnotizing visual style The Golem is really a stand-out work of pure cinema craftsmanship that all film fans should watch.  If you are on the fence about silent films I think Golem, Nosferatu (1922) and Caligari (1920) are very accessible, wonderfully haunting and strange films that warrant a watch. Every fan seriously interested in the genre should make it a point to not only watch these films but study them.

Golem is presented for the first time in North America in a stunning new 4k transfer from original material. Before the film plays Kino has a title card explaining the version you are about to watch:

No original German copy of The Golem: How He Came Into the World has survived. Two original negatives, filmed from different angles, were assembled from the exposed negative material. The "A" negative, containing the better material, is preserved in the Cinematek (Cinemathque Royale de Belgique).  For the 1921 US. release, negative "A" was shortened considerably. The present version intends to restore the "A" negative as authentically as possible to the lost German version.

The print is simply a revelation.  I can say with confident that I dont think this film will ever look clearer. The tints are restored and small details in set designs as well as Freud's well executed and strange cinematography truly shines.  For a film that is now one-hundred years old scenes look alive and clean with no dirt,artifacts or scratches in sight. I can only guess how many hours and resources were put into making Golem come to life for a new generation. Sound is equally good boasting a nice new score as well as three additional scores to choose from. Included is: Stephen Horne, Admir Shkyrtaj, Lukas Poleszak the US version has a score by Cordula Heth. Extras include: A side by side comparison of the US version and the German version runs twenty-two minutes long with commentary by Tim Lucas explaining the difference. This is really great as it shows how the film differs in alternative shots but also the difference in the restoration. Kino Classics always features great touches like this which helps frame the film in its historical context. Also included is a shortened American version running just less than an hour long. Further giving us a deep dive into not only the film but the background of the director cast etc, is a wonderfully done commntary by author and film historian Tim Lucas. Lucas is of course well researched and provides a wealth of information on all aspects of the film and its very entertaining to listen to. This track will no doubt get a Rondo nomination if not win.

The Golem (1920) needs to finally take its place as not only the first monster movie but as the seminal and influential film, that has inspired countless others. Kino Classics have really out done themselves providing the best possible version of the film in a marvelous 4k transfer. Any film buff should consider this a must own in their collection-period.  This makes my short list for best horror Blu Ray of 2020, its that good.