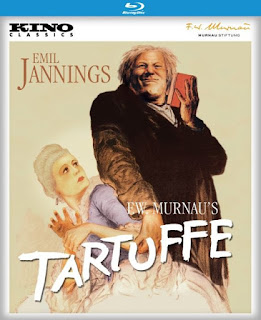 Even casual film fans, especially within the horror genre no doubt know F.W Murnau's 1922 seminal silent masterpiece Nosferatu.  The German director has worked in many genres including light drama which is the case of Tartuffe from 1925. For those of you not familiar, Tartuffe was a very famous play which has been adapted for screen, television and even an opera. In a nutshell the play is about a man who poses as religious leader and is exposed for his hypocrites. Set in present times the film sees an elderly gentlemen who is planning on leaving all of his money to his live-in housekeeper. This means the old man leaves out his grandson who is -gasp-an actor! The actor grandson somehow gets wind of this and comes over and, in disguise shows the housekeeper and grandfather a film of Tartuffe.  Murnau takes a page from Hamlet, using the play within a play to catch the guilty, only this time a film within a film.

Being a F.W Murnau film, you know its going to have a tight sense of direction and Tartuffe is clearly made by someone who has mastered the medium. Helping give this film an interesting style is legendary photographer Karl Freud whose credits include Dracula (1931), Metropolis (1927) and Key Largo (1948) just to name a few.  Its clear that Freud works including well with Murnau and Tartuffe has some great expressionist visual style as well as interesting camera work that helps liven the entire affair. Complementing Karls cinematography is a well done production design that helps give the film a more expensive and polished look. I cannot stress enough just how gorgeous this film is. There is no doubt this film is incredibly well crafted however some narrative issues do abound. Essentially there is two stories going on here, the framing device of the Grandson and the Housekeeper and of course, that of the film within the film Tartuffe. This kind of parallel/homage to Hamlet is a novel even interesting story device however its a very loose comparison. I cant actually get into specifics due to major plot spoilers but after the film wraps its hard to connect the two stories. Yes at the core the pompous pig Tartuffe and the Housekeeper are both scheming con-artists but, when we learn what the Housekeeper is really up to late into the film, she is decidedly the worst of the two. I think had we had more time building character arches and back story things would have been a bit clearer.

Now, I am not by any means saying a bad film and you cant help but be dazzled by Murnau's mastery behind the camera. The film retains a light and charming tone which makes it easy to gloss over some narrative shortcomings. Its not as epic like say Faust (1926)  but its nonetheless an engrossing and entertaining film that kept me glued. Like most films Tartuffe has a fairy tale like quality especially when we get into the film within a film. I was also surprised how brazen it was for the time with its overt sexual overtones without of course showing any nudity.  With its great acting and  extremely an exciting visual style that German cinema was known for Tartuffe is a richly sourced and charming adaptation. Probably not my favorite of Murnau but I highly recommend this film.

Kino Classics has brought this nearly one-hundred year old movie to life and -wow, its incredible. The title card prior to the menu reads us follows:

Four separate negatives of Her Tartuff were produced for the German and international markets. One of the export versions survives in its entirety, a duplicate copy preserved by Gosfilmofond, Moscow. It contains German inter titles of unknown origin.

For this digital restoration the image was tinted orange, as usual for export versions. The inserts are tinted yellow, while the inter titles remain black and white. Some insert shots were added from a fragment of the Swiss version, preserved by the Cinematheque Suisse in Lausanne. Additional shots were sourced from a nirate prints of the US version preserved by the Bundesarchiv-Filmarchiv in Berlin.

Similar to Kino Classics recent release of The Golem (1920) Tartuffe (1925) looks fantastic with very little dirt or artifacts. The clarity of faces and details in the set design are just awe-inspiring and truly does justice to work of Karl Freud. The film does look rough in places but I cannot stress the level of clarity on display. I very highly doubt that this film will ever look better any time soon. The film features a lovely new score by Robert Israel which truly adds a special touch to the already endearing film. Adding some great historical context is a feature length commentary with author and film historian Troy Howarth. Howarth's commentary is entertaining and is shines light on the making of Tartuffe, its cast and of course its incredible director and cinematographer. Well researched and very fun to listen to. This feature also includes the US version of the film which is shorter in length.

Kino Classic once again provides a incredible piece of cinema for new generations to re-discover. A must-own for any film fan.