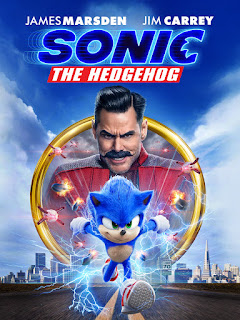 LONDON, UK.  – Get ready for epic fun and super-sonic action when everyone’s favourite hedgehog races home in the blockbuster hit SONIC THE HEDGEHOG, debuting for Download and Keep on April 10, 2020 from Paramount Home Entertainment. Bringing Sonic the Hedgehog to life in this fun adaptation, it’s easy to understand why this film is a must-watch, and achieved the highest opening weekend of any video game movie adaptation in film history!

Plot: Powered with incredible speed, Sonic the Hedgehog (voiced by Ben Schwartz), aka The Blue Blur, embraces his new home on Earth. That is, until he accidentally knocks out the power grid and sparks the attention of super-uncool evil genius Dr. Robotnik (Jim Carrey). Now it’s super-villain vs. super-sonic in an all-out race across the globe to stop Robotnik from using his unique power for world domination. Sonic teams up with The Donut Lord, aka Sheriff Tom Wachowski (James Marsden), to save the planet in this action-packed hit that’s fun for the whole family.

Review: Confession time: Outside of loving the cartoon as a kid, Sonic was never a big favorite of mine. I was more obsessed with a certain pair of plumbers from the mushroom kingdom. 2020's big budget Sonic The Hedgehog seemed doomed to fail before it even hit theaters. After all it was being directed by a first film feature director Jeff Fowler not to mention the disaster of a first trailer and the hard to look at Sonic design. And lets be real video game movies seem to never translate well onto the big screen. But since 2020 is a bonkers year Sonic deifies all odds and is actually a fun movie. From frame one Fowler flings us into a big bright fantasy world that sets the tone for the entire movie. I was worried that the character of Sonic would be a rude, crude annoying '90's 'in your face' caricature, but thankfully that is not the case. The big blue hedgehog is endearing without coming off too cutesy or trying way to hard to be 'edgy'. James Marsden was a nice choice to play opposite the CG character and outside of his solid acting he brings a lot of charm and likability. He plays off Sonic surprisingly well and their bond is believable. But of course its Carrey who truly steals the show with his portrayal of Doctor Robotnik. The comic turned serious actor is back in rare form with over-the-top antics and I think hes a pure delight to watch. I was worried he would over stay his welcome but that is thankfully not the case. His talent as performer is shines and his expressions, comic timing and body language all work so perfect for the character. Not to mention he has the best lines of the movie. I had braced myself for tons of game nods and time spent setting up or shoe horning in game side characters but yet again i was pleasantly surprised. Refreshingly the references are kept subtle and I didnt feel beat over the head with reminders of its source. Many films that tackle famous IP's like this have a hard time reigning in its fan service to give older audiences the nostalgic fuzzes but Sonic is a rare exception. It lets us enjoy the film on its own merits and sprinkles in nods for the die hard fans to enjoy.  Fowler also provides some really fun set-pieces and action scenes that kept me glued.

While there is a lot to like about this film it does have its share of issues. The story is a bit predictable and the overall outcome can be seen a mile down the well ran road. Also while the film has a strong emotional core I dont think it quite reaches the level it could have. Some logic gaps and plot holes in the story also abound.

Video game movies have a rough time at the box office because lets face it, they are almost always terrible cash grabs. Sonic does the impossible by not only doing incredible well raking in over three-hundred million but manages to be a darn good movie.  Sonic the Hedgehog is a fun, mindless bit of entertainment that, while far from perfect is a good time. Worth a watch.