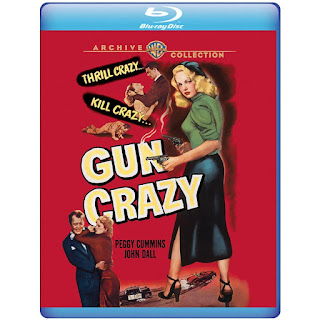 Retro Rewind is a segment in which I highlight older releases that deserve a spotlight! This week we look at a Noir classic Gun Crazy from 1950.

Co-written by legendary black listed screenwriter Dalton Trumbo, Gun Crazy tells the story of Bart (John Dall) a sharpshooter who gets mixed up with a trick shot femme fatale named Annie (Peggy Cummins) after seeing her perform one night at the carnival. Flash forward Bart gets a job with the circus and despite warnings ends up running away with her. But, like any good Noir Annie leads the young man down a crime riddled path of robbing and later worse. When most casual film fans think of Film-Noir they typically conjure up images of the hard-boiled detective ala Philip Marlowe, though the post War movement is much more than just whodunits. Make no mistake this is classic crime thrillers and it has the polish of great screenwriting and stellar direction. What I think sets this film apart from the others is Trumbo and Kantor take the time to give good guy Bart a backstory which pays off nicely in the films white-knuckle finale. And while I do love a good mysterious character, especially in these kinds of films I love how Dall's character is given some depth. Its very much like watching a sinking ship as Bart gets deeper and deeper into this life of crime. Director Joseph Lewis really crafts some great scenes of pure tension as well as some truly engaging action that you cannot help but get caught up in. And to its credit Gun Crazy clips away at a feverish pace at times and even its down-moments are anything but boring since its a character study.

Cinematographer Russell Harlan gives this film a wonderful moody and rich look that screams Noir. Harlan is probably best remembered for his fantastic job on To Kill a Mockingbird (1962) and Witness for the Prosecution (1957). Anchoring out the film is wonderful performances by the lovely and very talented Peggy Cummins (Night of the Demon) and John Dall which film fans will recall in Hitchcocks Rope (1948). Dall plays up his sweet naive nature while Cummins explodes with devilish sex appeal with the face of an angel.  Gun Crazy is a film I feel doesn't get nearly get the attention it deserves. Its a fast paced, character driven and moody crime thriller anchored by stellar performances.

Warner Archive had commissioned a new print utilizing original film elements. It really looks incredible with all the dirt and artifacts scrubbed out. What we are left with is a crisp, clear film that showcases its blistering mood by photographer Russell Harlan. The sound is great as well with a 2.0 mono track. The features include a new commentary by historian Glenn Erickson which is lively and engrossing. A worth while listen for fans of this film. The crown jewel of this disc has got to be the feature length documentary Film Noir: Bringing Darkness to Light (2006). Its a great documentary and perfect for those film buffs looking to explore Noir in more depth. It has great new interviews and archived interviews with scholars, actors and other notables. Its a very engaging watch.

Should be considered a must-own for Noir lovers.