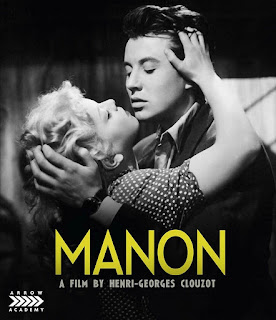 Fan's of the horror/thriller genre may not be familiar with the name Henri-Georges Clouzot but his seminal suspense/horror film Diabolique (1955) is said to have inspired the tone and atmosphere of Hitchcock's Psycho (1960) as well as prove a low budget black and white film could be effective.
Six years prior to that however he made Manon a equally moody crime drama. Told mostly in flashbacks the story follows Robert (Michel Auclair) a young solider in WII Paris who saves a woman named Manon (Cecile Aubry) from villagers who are about to assault her for allegedly consorting with German troops. Robert takes her away and later in Post WWII the two experience a rocky relationship due to various shady businesses Manon and her brother land him in. 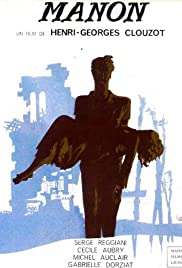 I like to think I am a very well rounded film buff and even though I am fairly familiar with the work of Clouzot this is one that has escaped me. This is a shame because its an excellent and moving film. Based on the classic French novel of the same name but updated to Post-WWII Manon is a highly interesting film of the period. Visually this is on par with a film-noir a movement of film which uses a German expressionist style. Long shadows and moody lighting by famed cinematographer Armand Thirard. His work is incredible and gives the film a much grander scope. For example Thirard utilizes this amazing sweeping crane shot as Michel's character exits a movie theater in a very dramatic scene. Thirard's work is complemented by great art direction by Max Douy who is probably best known for his work on the Bond film Moonracker. The hollowed and bombed out Paris is harrowing and grotesquely beautiful at the same time. The art direction is at times a character all on its own. There is some debate if this is a film-nor but it certainly has all the trappings, not only visually but also with its typical pulp-crime story. Manon also is pretty interesting as it has one foot in neorealism when it comes to scenes with the villagers. Clouzot keeps the plot going at a fairly brisk pace but also allows the film to have some real heartbreaking and moving moments. One comes to mind is at the beginning of the film when Jewish refugees break out into a sorrowful song. It feels raw and real and I get chills just recalling it. Narrative wise  I liked how they told the film mostly in flashback, as we learn Robert is running away from something awful he did and the mystery of what and how this happened makes it more engaging. French movies were able to be a little more daring and here Clouzot tackles taboo subject matter like prostitution in a way American films never dared to in '49. I will say the last twenty-five minutes might divide fans. Its also tonally different its jarring and almost feels like it belongs in a different movie. I think what saves it though is it has a incredibly bleak and almost Greek tragedy level it that feels fitting. Manon is a rare film that from jump has gripped me and I was engrossed by not only its plot but visuals and production value. I am really happy that Arrow Academy has made this widely available because damn its a great film.

Arrow has provided a nice new transfer that really showcases the amazing visual style that coats this entire film. The black and white photograph looks crisp and small details come through with incredible clarity. Sound is equally good with both the score and dialogue coming in clear and highlights some well done sound design. The extras are also worthy of this fine movie.  Woman of the Dune is a wonderfully informative twenty-two minute video essay from film Critic Geoff Andrew. Andrew gives us a deep dive into the films of Clouzot and of course Manon. The man clearly knows his stuff and is engaging and informative. Its a wonderful addition to this disc. Another unexpected treat is a vintage interview with Clouzot which further gives you a further understanding of the man behind Manon. Arrow Academy sets out to put out film-school worthy movies and they equally echo this mission statement with great features that helps put these films into their proper context. This is what I adore about this label and its such a treat to see these cool features they unearth. Overall this is a great movie and has an equally wonderful Blu Ray release.