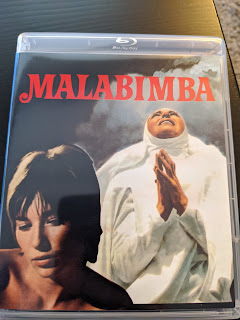 There have been a lot of The Exorcist rip-off's, some good like Beyond the Door (1974) but most are pretty awful. Malabimba is another sleazy Euro spin on the classic film but how does it stack against the others? After a medium conducts a seance the spirit of a former relative with a, shall we say trampy past inhabits sixteen year old Bama. Now locked away in a big Gothic castle, Bama starts acting out, and though her Father thinks its just puberty, we know she is possessed and out for revenge. In the meantime the family on hard times try to scheme wealth out of crazy uncle Adolfo.
Whew! So this was a movie I had often heard about but actually never got around to watching until now. If you are familiar with Andrea's other films like Burial Ground (1981) you know you are in for a grimy sleazy sex fest and Malabimba does not disappoint. While not my favorite of his out put I will say the movie delivers in shock value. In the film our main character Bama is suppose to be just sixteen (Dont worry she was actually nineteen) so seeing her do stuff french kiss her father or have sex with a nun or other naughty romps adds an extra icky factor. The sex itself is actually pretty steamy and Bianchi doesn't hold back on the hardcore action. The plot defiantly feels like it only serves to get to the next horny set-piece.  I think the plot or lack-thereof is what feels like the biggest let down. Between the spicy parts the film lumbers between soap-opera level melodrama and just a sprinkling of supernatural hi-jinks but clearly Andrea is not that interested. Fans of this might say this movie is more about the racy sex scenes but I dont think its asking too much to have a good plot to compliment it. Gore hounds expecting the same level of splatter as Andrea Burial Ground (1981) will be sorely disappointed. The film is virtually bloodless and even the one death in the film is pretty Meh. Having said that, Malabimba does have its own low-rent charms. Surprising the film looks like a bigger budget affair by utilizing a sprawling Italian estate and mansion with a nice production design at play. With all the films short comings there is a fun, cheesy so-bad-its-enjoyable element that helps make the film serviceable. It does this by doubling down on the weird, sleazy and perverse and this is where the film truly finds its voice. Andrea may not care about narrative polish but damned if he doesn't find ways to make me want to take a shower after his films. Bravo. As I stated above, this isnt a favorite of mine but I did think the sex is actually pretty hot, the nutso factor is high and every corner of the film is covered in a thick coating of grime which it wears proudly on its sleeve. Vinegar Syndrome presents the film fully uncut with all the hardcore scenes placed back into the feature.

Vinegar has done the best job it possibly could restoring this film and I think it looks great. Some moments in the film are yes, less than desirable but given VS track record I am willing to give them a pass. Clearly they have done amazing restorations in the past and compared to previous releases this looks miles better. Colors are bright and skin tones look natural and balanced. The film also sports a nice Mono track which is clear and easy to understand. Bonus features includes a great new interview with actress Mariangela Giordano and cinematographer Franco Villa. I love that VS goes out of their way to track down people from films like this, as it provides an interesting and invaluable look behind the scenes. Rounding out the features is a wonderful commentary by film historian/authors Samm Deighan, Heather Drain and Kat Ellinger. As regular readers will know I love commentaries and this trio have a lot of fun with this, but also its choked full of information. Clearly all three historians know their stuff but also keep it light/not stuffy. A trailer is provided as well as reversible artwork.

Overall if you like sleazy, sexy Euro trash Malabimba is worth blind buying or if you are already a fan -well it goes without saying its high time you upgrade.