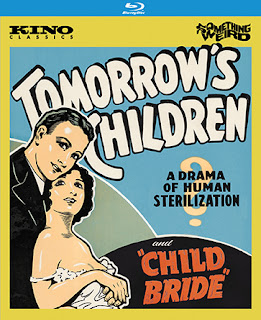 Vol 5 of Forbidden Fruit curates two family based/ hicksexploitation films from the '30's.  Tomorrow's Children from 1934 is a panic film about sterilization. A young woman wants to marry her boyfriend but sadly due to her families "rotten genes" she is threatened with sterilization.  Now its a race against the clock to stop this operation before its too late! Wow, this film is certainly not for the easily offended as there is so very frank '30's style talk about mental illness and developmental disabilities and people with disabilities in general. But like all these films though, the topic is presented in such a over-the-top way that its more funny than actually shocking. Tomorrow's Children showcases the poor as dishonest and vile and therefore it could be seen as an early film in the hicksexploitation genre, which exploited the back woods, hillbillies as evil, inbred which would morph with the horror genre to produce films like The Texas Chainsaw Massacre (1974) and The Hills Have Eyes (1977) and later films like Wrong Turn (2006).  While this is far from a horror film it does shine a light on how ugly country life could be which has its DNA in these later films. Of course the film has some incredibly hilarious performances especially the redneck family. The one kid playing with whiskey bottles is  a memorable. As amusing as the film is the pacing is rocky and I found the film to be a bit of slog in parts. Its interesting to see a film all about a strange topic like mandatory sterilization in such a frank and up front way. A odd-ball movie that needs to be seen to be believed.

Child Bride is infamous for being the only film Mystery Science Theater 3,000 flat out refused to rift-on.In an interview  Michael J Nelson called it "disturbing" Tomorrow's Children flirted with the hicksexploitation genre yet Child Bride seems to be it fully realized. An educated schoolteacher rocks the boat in her small mountain community when she advocates to stop older men marrying under-aged girls. This makes her the target from the men in the town, as she is a threat to their way of life. Meanwhile a vile man is after young  Jennie (Shirley Miles) and will stop at nothing to get her all of himself. Can a law get passed in time? Nelson was certainly on to something when he called this movie disturbing, as the topic itself is unsettling. And this being a moral panic film they do not shy away cringe worthy scenes and though sex is never actually discussed its of course heavily implied. One uncomfortable scene is Mills skinny-dipping (keep in mind she was twelve at the time) though I believe a double was used. It still pretty skin-crawling. What keeps the film from getting too dark is the typical bad acting, hilarious dialogue and hillbilly caricatures.  I actually think between the two movies though, Child Bride is the better paced and seemed to have more going on. The action scenes keep the film clipping away and its always great to see Freaks actor Angelo Rossitto. Both creepy and funny this is a film that is a rite of passage for Grindhouse lovers.

Kino Classics/Something Weird once again proved both films looking the best they have in a long time. Clearly a lot of time, hard work and resources have gone into preserving and upgrading these films. The commentaries are a great touch and provide an entertaining and historical context for each film.