Kino Classics in conjunction with Something Weird Video has unleashed the fourth volume in their Forbidden Fruit series. We have a double feature of Drug-Panic movies from the '30's! Strap in Folks its gonna be a wild one! 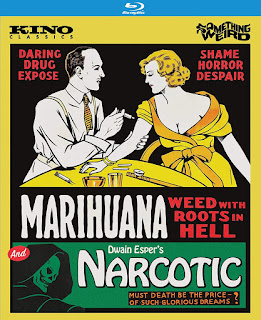 Graphically depicting the dreaded devils lettuce like never before! These anti-drug movies from the '30's are a laugh riot. The most famous of course is Reefer Madness (1936) (included in Vol 2). Released the same year, Marihuana tells the story of Burma (Harley Woods) has it hard being upper class, white and pretty and to make matters worse she is jealous of her sister who gets most of the attention from their parents. Due to a series of events involving drugs she loses her boyfriend and turns to a life of drug paddling and later kidnapping, all thanks to Satan's whacky WEED!! While not nearly as over-the-top or infamous as Reefer Madness this film certainly is hilarious for all the wrong (or right) reasons. Much like you would expect from these anti-drug movies from the period the productions  budgets are incredible low and the writing and plot should be taken with not a grain of salt but a fistful. These movies were more about shocking kids 'straight' then actually presenting an honest look at drugs. And bad-movie fans such as myself wouldn't have it any other way. Heavy handedness a bounds and of course every one that does drugs meets a a grisly fate. The early scenes in the bar hall have a fun kind of high-energy (no pun intended) that makes these movies a fascinating  and bizarre time capsule. Esper treats us to enough sleaze and hammy situations and terrible acting to make this worth while. I was also very surprised that taboo topics like having a child out of wedlock (a big no-no with the Hollywood censors) as well as full female nudity to further titillate the audience. This also blends in pre-WWII gangster films which were very popular following films like Little Caesar (1931), The Public Enemy (1931) and so on. These films were in a way mortality plays so it makes sense this aspect would fall head first into a drug panic movie. Honestly not my favorite of this ilk, it is still a lot of fun to watch.

An early directing effort for Dwain Esper, tells the story of a doctor named William Davis (Harry Cording) who starts getting high at on opium to escape his stressful life. This of course begins to have a take a toll both his professional and personal life. After an auto-accident he gets hooked on more drugs and thus spirals deeper into depravity, soon becoming a shady snake-oil salesman in a traveling circus. Can the love of his wife save him from wreck and ruin or is it already too late? Now we switch from pot to opium and middle to upper white teens to a respected doctor. But like Marihuana the good doctors down fall is steep. Tone wise Narcotic is defiantly the darker of the two films with some pretty unsettling scenes of violence on women and the Chinese American stereotype is cringey for sure. The film is of course so-bad-its enjoyable and I love how once the good doctor turns evil he literally looks like the devil, complete with top hat, cane and sinister pointed beard. It is here where we get some great '30's era circus/freak show footage. One of the films more amusing moments is the drug party. Esper makes a point of providing a title card proclaiming "Very few people, other than professional investigators, have ever really witnessed a "dope" party.

While I was expecting something a little more wild, the scene is still pretty funny and features some great pre-Code drug talk as well as depicting people shooting up, something probably very shocking for the time. I will say the film touches on the plight of opioids being used as a pain reliever, which is eerily topical even today. Unlike a lot of these films Harry Cording was actually in a lot of A-pictures including The Black Cat (1934) and The Adventures of Robin Hood (1938). Narcotic isnt as off-the-wall as you might expect but it is a fascinating car wreck thats worth rubber necking at.

Picture wise the film looks great, having been restored with the aid of the Library of Congress and the UCLA film and television archive. Both films look great and while not perfect looks incredible clear for films that are almost one-hundred years old. Sound wise is also good with clear dialogue and minimal distortion.

Being Kino Classics and Something Weird Video we get a wonderful array of bonus features. Marihuana features a brand new commentary by Bret Wood co-author of the book Forbidden Fruit: The Golden Age of Exploitation Film. It also features a great vintage commentary by David F. Friedman and Something Weird founder Mike Vraney recorded in 2000. I love that both commentaries are included. Narcotic also features a commentary by Bret Wood. Probably one of the coolest feature is scenes from trailer from the now lost Esper's film The Seventh Commandment from 1932.  Rounding out the features is two short films produced by Esper, How to Undress (In Front of Your Husband) and How to take a Bath. The former of which includes two different versions (long and short) and trailers.

Kino and Something Weird Video has given us fiends another sinfully enjoyable exploitation double feature and an array of amazing bonus features! Must Own.