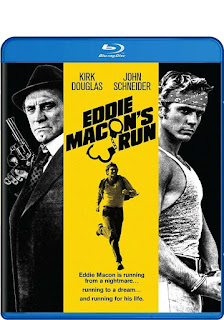 Arguably one of the great actors of the 20th century was Kirk Douglas. His career spanned decades and his films are as iconic as they come. Sadly after the Golden age of Hollywood ended Douglas started getting fewer great roles, though he could make anything great by just appearing in it. Such is the case with this '80's dud. Eddie (John Schneider) is arrested on trumped up charges and escapes from prison and is caught by police officer Carl Marzack (Kirk Douglas). He plans on escaping a second time which, as state law will land him in jail for a very long time. Eddie goes through with it anyways and now Marzack is hot on his trail. Oh brother, where do I start with this film? Eddie Macons is an odd film as it feels very much like a wrong-man type of film, a troupe Hitchcock was famous for. But the thing is  Eddie is sent to jail for you know assaulting his boss and driving drunk and later assaulting an officer. Our hero ladies and gentlemen. Instead of just serving his time of five years Eddie himself only adds to his jail time and is willing to gamble more on escaping a second time. There is a cheap and cheesy, 'my son is sick' side plot which is meant to make Eddie relate able and tries to mask his frankly shitty behavior. I for one found that hard to buy. I might have been able to go with it, but Jeff Kanew weirdly takes the film in a very serious direction and the film has tonal issues in general. I have no doubt this film could have worked had this been more of a comedy or at least injected humor into the action/drama. However its  brutal violence as well as sexual assault towards women (the director gives us not one but two scenes of violence/rape)whats for an uneasy watch. I think whats most disturbing though is how casually this subject is treated. For example Eddie stops the rape of a woman named Jilly (Lee Purcell) and then ends up taking her hostage and of course the pair end up romantically involved. At one point he even verbally abuses her not long after this double traumatic event.Not sure what kind of message that is suppose to send.

Dukes of Hazard actor John Schneider tries his best to carry the film but he comes off more like a sleepwalker rather than an actor. As I said above its Kirk Douglas who truly makes this film even bearable to watch. Douglas who was in his sixties at the time really gives a performance that is not nearly worthy of this b-film. Another highlight is Tom Noonan chewing the scenery as a psycho-hillbilly who gets extremely excited to hang our hapless hero. This film is also John Goodmans feature debut (hes in it for one scene). Joyless, baffling in its plot which is filled with holes,  (not to mention  WAY under cutting the excellent cat and mouse game with its final "twist") and cliched with a predictable ending. This movie has gained a minor cult following which boggles my mind. Maybe its the '80's nostalgia or the fact that Douglas gives it his best but for me this but its truly dreadful and woefully dated. It has a boys will be boys kind of attitude tries to make the main characters shitty behavior alright when frankly hes a walking sociopath.Normally I try to find some forgiving aspects for a film but I find set a huge disconnect with almost all of the characters, especially the so-called "good-guy". Not worth seeing even for Douglas fans.

The picture looks good but sadly an old transfer seems to be used for this edition. Colors look decent enough though. Skin tones look natural and not faded or over saturated. The sound is also fine with a strong Mono track. Dialogue such as it is comes in clear. No bonus features are included. Overall the value is right depending on if you enjoy this kind of all-over-the-place film.