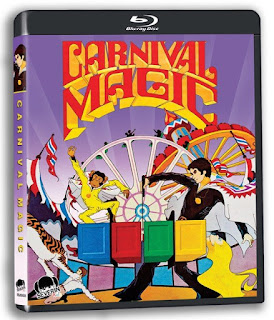 Al Adamson's second to last film and first foray into children's entertainment was the known infamous Carnival Magic from 1983. The film had actually been considered lost for years until it was found and re-released. It gained a cult following after being featured on the revived Mystery Science Theater 3,000 in 2017. A magician and a sparky talking ape help transform a run down circus into a huge hit. Hi jinks and monkey antics ensue as an evil doctor wants to experiment on the ape to find out how he can talk. Carnival Magic is every bit as weird and baffling as you've no doubt heard. The films fun is kind of weighed down by soap-opera level drama. Also the Carnival Magic explores darker themes like alcohol abuse, animal abuse and um..just regular abuse. Its this weird tag-of-war between taking animal kids film and strange adult potboiler. Adamson features a lion attack that isnt graphic but certainly harkens back to his gore-hound days. The two very different tonal shifts and genre mashing coupled with a slower pace would be no doubt unbearable for its target audience/children.  Luckily though the film offers enough cheesy dialogue, bad acting and baffling side-plots and plot holes that its hard not to love its so-bad-its-entertaining aspects. This is no doubt why it was a perfect fit for rifting on MST3K. Say what you will about Adamson but he had a passion for films and even though its pretty bad its so earnest in its execution. For film lovers who want to belly up to a buffet of apes, hillbilly police chases, uncomfortable inter-species flirting and of course magic look no further than this odd-ball programmer.

Bonus features include a whooping twenty-minutes of outtakes. A Boon to Science: A Critical Appreciation  by Zack Carlson and Lars Nilsen (11 mins), a feature length commentary by producer Elvin Feltner. This is a great array of features for this ultra-weird kids film produced by the legendary Al Adamson.

Al Adamson known for shocking horror and bare breast epics closed out his film career by making, of all things a kid's film entitled Lost. Penny (Sandra Dee) and her daughter Buddy (Shelia Newhoue) move to Utah with Step Father Jeff (Don Stewart). But Buddy hates living out in the middle of Utah (who could blame her). Out of boredom she wanders off and soon finds herself getting lost in the unforgiving wilderness. The parents I might add have a cup of coffee when learning their daughter is missing instead of, i dunno trying to find her. She battles the elements, mountain cats and meets a creepy mountain man who is the very definition of stranger danger. Lost is a baffling film as, it is clearly intended for a kid based audience but I find it very hard to believe a kid would find this movie entertaining. Say what you will about Carnival Magic at least had a high-camp value to make it entertaining in a so-bad-its-fun that makes it passable. Lost gets well lost in woefully underdeveloped melodrama instead of high-spirited adventure. Its a slog to wade through even for myself, an adult let alone a kid with a low attention span. Adamson also piles on the sappy feels and the whole thing plays out like a overly long After School Special, which is certainly a hellscape more terrifying than any previous Adamson outing.  This might not have been too-bad but the film is ninety minutes when a solid hour would have been plenty. Some scenes feel incredibly out of place like at some point a barn burns down which isn't referenced again. We also are treated horrifying scene of Buddy chasing after later pulling a piglet by its legs wheelbarrow-both screaming to high heaven. Why? Because padding thats why.

Besides being Adamsons last film this is also notable for being '50's and '60's icon Sandra Dee's last feature before retiring from show business. It also features wonderful old character actors like Ken Curtis and Jack Elam and legendary stuntman and Adamson collaborator Gary Kent has a role as Jack Stokes.  I will say the film really uses its natural locations to its upmost beauty. Adamson really did knew how to use real locations to give his low budget films a bigger scale. Overall the film lacks adventure and tight pacing to make a good kids movie.

Bonus Features Rushes for an unproduced kids film called The Happy Hobo, which is just as odd as it sounds. Its little touches like this that truly make Severin a label that leads the pack in sublimely weird and rare offerings.

If you ever wanted to see what a warped mind like Al Adamson would do with a kids film, Carnival Magic is a sure fire hit with Grindhouse fans. A must own!