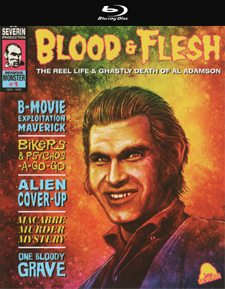 Sometimes nose-in-the-air critics like to throw around the phrase "They’re really scraping the bottom of the barrel here," but being film fiends, we enjoy getting dirty. This means bravely diving bleeding head first into the toxic barrel of bad cinema. Down there, languishing in its own radio-active goodness, you`ll find the gender bending nightmare land of Ed Wood Jr or the dime store gross-out epics of Andy Milligan. Of course, you`ll also discover the wild, savage often naked and surreal films of one Al Adamson. Don’t know A damson's works yet? Well, thanks to Severin Films, it was just announced that a career spanning box set entitled 'The Al Adamson Masterpiece Collection' will feature his grimy work in all its HD glory. Included in the set is this original feature length documentary directed by David Gregory. The film tells the story of Adamson, his crazy adventures in Holly-weird and how he turned his celluloid trash into treasure. Helping tell this story are new interviews with friends and colleagues Russ Tamblyn, Gary Kent and Greydon Clark, as well as archived interviews with actor John Bloom and cinematographer Gary Graver. Probably one of the most amazing interview coups is Oscar winning cinematographer Vilmos Zsigmond, who shot three films for Adamson early in his career. Of course, we get to hear from the man himself as Blood & Flesh uses the last interview Adamson ever gave. I must admit this gives the film an eerie quality since going in, we know things aren’t going to end well for the cult director.

Gregory has a lot of experience making documentaries (both short and feature length) and he applies his wealth of experience to craft an unforgettable ride filled with lively interviews that are both well paced and placed. The end result is a focused and fascinating story of Adamson’s prolific career and untimely death. It didn’t take long before I was totally invested in the story that Gregory lays out.Not only is it a well thought out documentary but it's visually interesting as well. Gregory employs visual effects tricks to keep things stylish and brings flat images to life along with great transitions. We also get a fun and very fitting score by Mark Raskin, who has worked on Gregorys other documentaries including Masters of Dark Shadows (2019), Lost Soul: The Doomed Journey of Richard Stanley’s Island of Dr. Moreau (2014) and his segment in the woefully under-loved Theater Bizarre (2011). It's touches like this that makes Gregory one of the best documentary filmmakers within the horror and exploitation genre. I was curious regarding how the film would treat the subject of Adamson’s grisly death. Wisely, the film handles it with a lot of tact, and in a bitter irony (unlike Adamson’s films), it isn’t used for exploitation's sake.

It’s a hell of a documentary that makes me feel something as well as educating me, and damned if I didn’t find myself choked up at the end. After all, we spend over one hundred minutes getting to know Adamson, hearing from those who loved him, and the man himself.

Sex, dope, bar fights and wild west action, all of this and more in Adamsons sexploitation western The Female Bunch (1971). Sandy (Nesa Renet) is saved from an attempted suicide by a friend and is talked into joining an all woman gang into shady deals and carnal lust. Counter culture westerns were all the rage as the traditional ones made by Hollywood were all but died out. Like all Adamson films the film is low on plot but high on sex, violence and mayhem. This film reminded me a lot of H.G Lewis's sorely under loved She Devils on Wheels. It takes the western genre and flips it on its ass with a heaping help of cheeky romps through in for good measure. Story wise is nothing you havent seen in other movies yet, like all Adamson films, its more about the weird, wild journey not necessarily the plot. Female Bunch was partly filmed on  the infamous Spahn movie ranch. This was the hang out for Charles Manson and his "family". The cast is great with genre legends like Leslie McRay (Girl with the Gold Boots), Russ Tamblyn (The Haunting, Twin Peaks) and of course Lon Chaney. And this is where things get bitter sweet as this would be the final outing for Lon Chaney Jr, best known for his hairy raising turn as the titular Wolf Man in 1941 which ushered in the Silver Age of Universal Monsters. He is in pretty bad shape at this point and his gruff and raspy voice was the result of treating his throat cancer. It was extremely sweet of Adamson to give him top-billing for what would  turn out to be his last feature. Al had a way of making a terrible movie fun and entertaining and Female Bunch is a sex-upped Western that plays to the far-out midnight crowd.

Extras: The Bunch Speaks Out featurette and trailers.