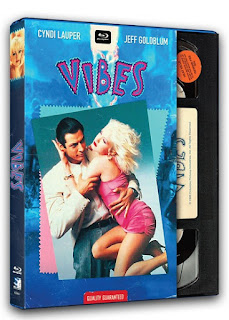 Vibes (1988) is a film that has a fierce cult following despite being a commercial and critical bomb when it came out in '88. It makes its HD premier from Mill Creek Entertainment. The plot centers around two physics Nick (Jeff Goldbloom) and Sylvia (Cyndi Lauper) that are duped into using their abilities to find a lost city filled with treasure.  Vibes is an action adventure comedy that is weirdly low on all three counts. The film takes a long time to get into the meat of the adventure-and by long a mean an hour into the scant ninety-nine minute run-time. No doubt this is meant to pad out the already thread bar plot. Once the film does finally get going its too-little-too late and feels just as hokey and corny as you would expect from a Lauper/Goldbloom '80's adventure comedy. And if you dont like Lauper or Goldbloom -Oh Boy settle in because both actors play up their respected on-screen traits to the max. Kwapis tries to weave a romance element but the pair of strong personalities have zero chemistry together. Cyndi is not terrible in her role as a kooky physic but she tends to get a bit much at times. And Goldbloom is, well the same as he is in every movie. Adding to the cheese fest is Peter Falk. Falk seems to be playing a cartoon character hamming and chewing his way through every bit of scenery he can. Seriously Cyndi Lauper gives a more subtle performance and thats really saying something. I really think Falk is my least favorite thing about this film. 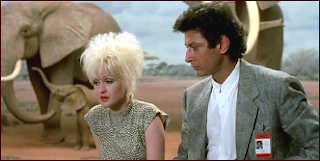 Plot wise the film is disjointed and there are a litter of story holes and things just just smack of lazy writing. This film is meant to be a rousing adventure but the stakes feel incredibly low and I never felt like the characters were in any real danger, just inconveniences. I both understand and am baffled by this films rabid cult following. Perhaps its a strong sense of '80's  nostalgia (Lauper and her neon outfits are practically a billboard for fashion of the decade) and no doubt adults recall this movie from their childhood. Also Cyndi Lauper has a huge fan base as well as Jeff Goldbloom so that might add to it. Real talk I  felt the film lacks the charm and comedy its suppose to have or maybe others see in it. The comedy falls flat and the performances are all over the place, by either under playing or over playing a situation. And I think I could have forgiven this had the story being compelling and enjoyable. Its like the studio execs merely built the story around the two zany characters rather than fitting them organically into an engaging situation. We spend the entire film with some not very likable characters- Goldblooms being the most bearable or somewhat relate-able. To sum up the film isnt funny and lacked a genuine heart.

For fans of this film Mill Creek has provided a pretty good looking Blu-Ray. Colors for the most part balanced and vibrate. This is no doubt a transfer from a previous edition. Its not the greatest print but honestly nobody expects 2k or 4k transfers from this company. The sound is also good with a clear 2.0 Mono track. No features are included on this disc. Overall I think for fans of '80;s movies this is hit or miss depending on how much you love both stars. Regardless Mill Creek has re-packaged this film in a decent looking transfer and at a cost of less than ten dollars its worth picking up if you are a fan.