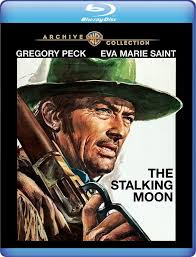 By the late '60's the American Western genre was dying out just as Sergio Leone was creating the more violent count-culture inspired Spaghetti Western or Italian Western. By the late '60's and throughout the '70s's  parody/comedy films like Blazing Saddles (1974),Support Your Local Sheriff (1969) and Shakiest Gun in the West (1968) flooded the market with Stalking Moon being one of the rare exception. Retired Army scout Sam Varner (Gregory Peck) agrees to take a white woman Sarah (Eva Marie Saint) and her half Apache son (simply known as boy) to the city of Silverton. Varner takes a liking to her and agree's to give them lodging at his country home as a cook. It seems the husband of Sarah is tracking her down, wanting to take her and his son back. While this is a Western Mulligan makes it more about the drama and character leaving the action set-pieces as the cherry on an already well developed cake. Towards the end of the film things to start to play out like a cat-and-mouse thriller which puts an altogether different spin on the genre. Mulligan somehow manages to build a great deal of suspense in the daylight isolated mountain wilderness.  The pin-point perfect directing of Robert Mulligan and his attention to detail is further elevated by an incredible cast. George Peck is an inspired choice having worked with Mulligan on the classic film To Kill a Mockingbird (1962). His leading man charm mixed with his rough and ready looks and voice like gravel velvet fit perfectly within the world Mulligan has crafted. I mean Peck just looks like a worthy companion on any Eastwood/Leone project. Eva Marie Saint probably best known for films like On the Waterfront (1954) and of course Hitchcock's North by Northwest (1959) also turns in a solid performance as a strong yet tortured woman aided by Peck's character. She gives Sarah a quiet pathos and she never downplays or overplays the role. Cult actor Robert Forester gets some screen time as well. 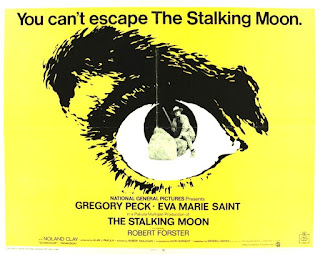 The Stalking Moon also boasts impressive and awe inspiring cinematography by Oscar winning DP Charles Lang. Lang was considered one of the greats of the Golden Age of Hollywood and worked on such classics as Sabrina (1954), Some Like it Hot (1959) and The Ghost and Mrs. Muir (1947). Lang really brings out the hypnotic beauty of the harsh and at times unforgiving landscape. His work gives the film further polish but also a scope that feels incredible epic. Fred Karlin provides the films score and it's quite a effective and understated score. So any time you are dealing with a movie about Native Americans its almost always problematic for one reason or another. While Mulligan keeps this cringe to a minimum you still cant deny the fact that the hero is white and the villain is Native American. Having said that I don't think Mulligan intended any hate with Stalking Moon and while yes some of it is unfortunate I still found myself enjoying the film but it makes me very thankfully we've come a long way fifty-plus years later.  I had actually never heard of this film despite starring one of my favorite classic Hollywood actors. Moon may be a bit of a relic as its a Western film made when the genre was already dying out but Mulligan manages to make it feel fresh by injecting a top notch cast, gorgeous cinematography and a great score. This movie is extremely underrated and I hope that with this release it starts to get a bigger following.

Warner Archive has dusted off this film and once again provided a great transfer. Lang's photography is brought to life and we get a cleaned up look at his breathtaking work. Scenes which are darkly lit benefit greatly with this new restoration. Artifacts, dust and dirt have been digitally removed and what we are left with his a clear, bright picture that pops. A healthy 2.0 soundtrack brings Fred Karlin off-beat soundtrack to life and dialogue is crisp and clear. The theatrical trailer has been provided. Overall if you like Westerns or like rich drama and thrillers wrapped up in a coating of a Western this is worth while film.


If you are interested in more movies from Robert Mulligan, Warner Archives also released his film Summer of '42 in 2017.
Posted by The Video Attic at 12:02 PM