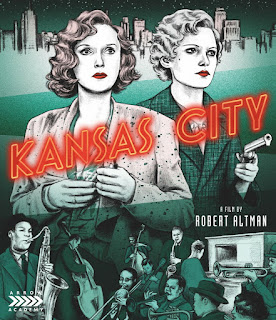 Arrow Academy is no stranger to releasing the films of Robert Altman: Previously they have released special editions of Gosford Park (2001) and Images (1972) with Kansas City (1996) being their latest Altman offering. Set in '30's depression era the film tells the story of a girl named Blondie (Jennifer Jason Leigh) who kidnaps a solitaire named Carolyn (Miranda Richardson). She does this in order to get her thug boyfriend Johnny (Dermot Mulroney) from the clutches dangerous gangsters. While this film spit critics upon its release Kansas City remains a sorely under-loved film from the '90's. Altman who was originally from Kansas City sets his crime-noir love-letter/period piece in the smokey high flying world of '30's nightclubs and dark streets. The main center piece to KC is of course the Hey-Hey-Club which Altman stocks with living legends to provide the film with an epic soundtrack and on-set-performance. The musicians are of course really playing and it gives the film a earth-shaking energy as well as a depth of authenticity rarely seen in films of this ilk. Kansas explores themes of race and class and while its very in your face it doesn't seems reek of exploitation or done for shock value. Its honest and blunt and yes uncomfortable at times but it makes the world feels rough and lived in. I also loved how the film is not over-stylized like some period films. From the rich set pieces to the costumes and an moody atmosphere this movie demands to be seen and heard. Altman's world is of course populated with some incredible actors. Jennifer Jason Leigh gives a knock-out performance as the street wise Blondie. She knows exactly how far to go without playing it like a cartoon. Equally great is Miranda Richardson, Harry Belafonte, Steve Buscemi, Michael Murphy and Dermot Mulroney. One thing you have to say is Altman worked with the best actors of any generation. 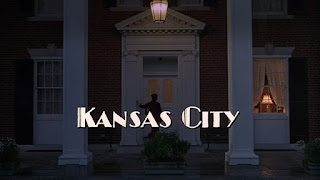 I guess if I had to raise an issue I had with this film it would be that Altman has a lot of lofty and ambitious ideas for this film and I dont quite think it hits the marks all the time. Like there are story threads that could be a movie all by themselves and sometimes we lose focus on the main plot. If you enjoy wry, gritty and sometimes darkly humorous period drama's Altman's over looked Kansas City is one hot ticket with a epic jazz soundtrack and on par with his other classic works. Arrow Academy's release sports a lovely looking 2k transfer. The print is great looking overall and helps highlight the films smokey, gritty atmosphere. I found small details that really give a lot of credit to the production design. As I mentioned in my review the soundtrack is great and Arrow provides both a 2.0 and 5.1 track. Dialogue is crisp and clear and of course the music really pops with both tracks (especially the 5.1). This release ports over older extras like a commentary by Robert Altman as well as a visual essay by critic Luc Lagier filmed in 2007. Highlights is also a 1996 promo featurette which includes cast and crew interviews. Rounding out the features is a brand-new film appreciation by critic Geoff Andrew as well as trailers, t.v spots, image gallery and electronic press kit. The first pressing also includes a booklet featuring new writing by Dr. Nicolas Pillai as well as the original press kit notes and an expert from Altman on Altman. As always Arrow provides a stunning collection of extras.