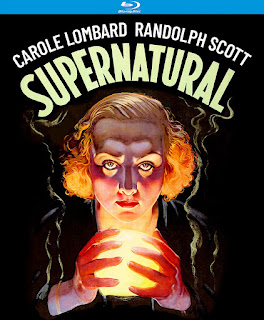 1933's Supernatural is an odd-duck of a movie that stars Carole Lombard in an early role and comes from the director of White Zombie (1932). What makes it odd, outside of its zany plot (more on that later) is that Lombard was known, not for horror but light screwball romantic comedies. In fact she was known as the Queen of the Screwball Comedy. A woman serial killer named Ruth Rowen (Vivienne Osborne) is finally paying for her ghastly murders via executions. A man named Dr. Carl Houston (H.B Warner) has this theory that Rowen's spirit will possess another person thereby compelling them to also kill. Its never explained how he knows this but with a lot of this movie we just have to take the word of the good doctor. Meanwhile we are introduced to Roma Courtney (Carole Lombard) who is now an heiress when her brother dies. A shady spiritualist named Paul (Alan Dinehart) contacts Roma in order to to con her out of her money. It just so happens Paul has a connection with Ruth. As Houston predicted when Ruth dies she possess Roman. Now inhabiting Roma, Ruth sets out to take her revenge on Paul.Whew! Okay, typically I try not to go into great detail with plots but it seems important with this review. As you can probably no doubt tell the writing is rather sloppy and the entire affair goes from one plot convolution to another leading to a finale that is not very satisfying. It pretty much just peters out. Having said that there was some nuggets of brilliance. Most supernatural films of this era were often presented as legit but later debunked as some sort of a scheme and Halperin's film does this but then also presents a very real supernatural entity which I thought was cool. I also enjoyed the weird characters like the drunk landlady played to the hilt by Beryl Mercer. And because this is a pre-code horror film we get some more provocative outfits and subject matter. There are other aspects of the film that helps sort of gloss of the lack-luster writing. 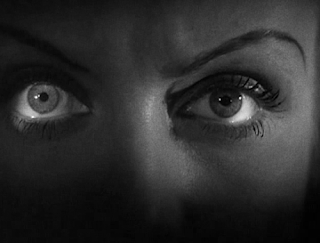 Technically Supernatural is a pretty interesting film. Halperin dips into his bag of spooky-tricks and pulls out a palpable mood and aided by DP Arthur Martinelli does some very  invention camera work and nicely done tracking shots. For a lower budget production the look has a bigger scope than you might expect and the filmmakers were clearly working with a very solid production designer.

And while the cast is solid its of course Carole Lombard who steals the show. Not only do we get a rare straight dramatic role but also a sexy vamp's turn when the mousy Roma is inhabited by the evil Ruth Rowen. Vivienne Osborne is also great as the murderous Rowen and she chews every bit of scenery possible. Supernatural had glimmers of brilliance both in its performances and technical side, however the hopelessly bad writing sinks this film to the bottom of the cinematic barrel.

Kino Classics has released this obscure horror thriller on Blu Ray in a stunning 2k release. For a film that is over eighty-years old Supernatural looks great. Its not totally artifact free but its clear that this film has never looked better. Definition is sharp and showcases the good production values. The sound is also great with a nice clear 2.0 Mono track. Extras include a commentary by writer Tim Lucas as well as an original trailer. I love Pre-Code horror and this is a rare gem that, while it doesnt exactly hit the mark is still worth checking out.