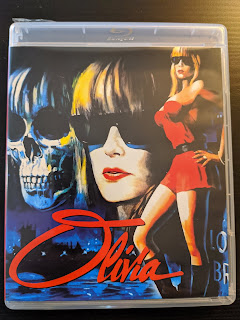 Ulli Lommel has had a very interesting career, having worked as an actor in over ninety projects and has worked with icons like Andy Warhol and Rainer Werner Fassbinder. He was also a director with over sixty directing credits to his name. Thanks to Vinegar Syndrome his '83 film Olivia comes to HD Blu Ray for the first time. At age five Olivia (Amy Robinson) witnesses her Mother being brutally killed by John in a kinky sex act gone wrong. Now all grown up Olivia (Suzanne Love) meets a American engineer named Mike Grant (Robert Walker Jr) who is working on the London Bridge. The two have a hot affair but Olivia is also in a abusive relationship with another guy. Five years passes and Mike finds Olivia living as an American real estate agent having dropped her accent. The two pick up where they left off but it seems like her past is about to catch up with them both. Ulli Lommel presents a naughty thriller and while its sexy, the thriller aspects are weak and confusing. Olivia as an adult kills a John pretty early into the film and I was expecting this to follow her carnage- as a way of turning the tables on what happened to her mother. Yet strangely this murder is never brought up again. Instead the film turns shifts right into a steamy affair/romance with a dash of revenge at the finale. Characters are set up and dropped at will, leaving the audience feeling unsatisfied. Its a film that feels like big chunks of it are missing, with plot holes and threads that are left totally unexplored. Like why did Olivia disappear for five years, did she kill more people? Why did it take so long for her ex to come after her? Ulli isnt very interested in any of this and one is left more questions than answers. Son of the legendary actor Robert Walker plays Mike Grant and is great given the silted lines he has to work with. Sadly though, Walker Jr is not given anything very interesting to do and is unceremoniously exited out of the film. Olivia seemed like it was going to have the main femme fatal act as a murderous spider-woman but sadly this isnt really the case. The entire movie feels aimless and could have used some major re-writes both in plot and dialogue. I will give the director credit for some spicy scenes with Love.

Vinegar Syndrome presents this film using the best possibly elements. The new 4k transfer is incredible looking with colors that pop and skin tones that look natural. At the out set VS warned that the elements they had to work with was not the greatest but I still think it looks great. Night scenes for seems like they benefit the most from this cleaner, sharper print. The film sounds great as well with a nice clear 2.0 Mono track. As always VS puts a lot of love with their bonus features as much as they do with the look and sound. First off we get FOUR brand new interviews including star Suzanna Love and cinematographer Jon Kranhouse and writer and asst. director John P Marsh and editor Terrell Tannen.  All are very entertaining and shed light on not only the film but the legendary Ulli Lommel. Rounding out the features is an ultra rare 8mm behind the scenes footage narrated by John P Marsh and the original trailer. It also includes a reversible cover artwork.

Syndrome always is so exciting in what the release and though I wasnt a huge fan of this movie, some of you might be and this disc is jammed PACKED with great bonus features.
Posted by The Video Attic at 2:38 PM