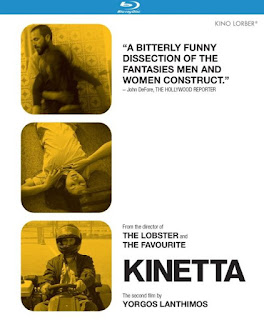 In just a short amount of time Yorgos Lanthimos has emerged as one of the boldest and interesting directors to come onto the indie scene. Needless to say I am a big fan of his raw and devastating character driven films. So, imagine my excitement when Kino Lorber has released his second film to Blu Ray. A filmmaker, a Chambermaid and a detective form a weird group, their goal, to recreate murders based off a local serial killer. If you are looking to get into the films of Yorgos Lanthimos I woulds say this is probably not a great one to start with. Kinetta is extremely slow paced and it has the feeling of a budding filmmaker that is more interested in playing around with the conventions of the medium rather than crafting a narrative. As I stated above this film is almost mind numbing in its pace and often times we see characters just doing their day-to-day stuff like eating or just sitting in complete silence. I dont mind a slow burn film as long as its entertaining and I find myself engrossed in the world the director and actors have created. I struggled to connect with Kinetta though I will say you can still see his raw talent in how he crafts shots and directs. I did find some aspects to be worth while. Yorgos employs hand held cameras and, since this film is about a filmmaker I liked this meta-approach.  But the thing I think I found most interesting is how there is very little in the way of dialogue or music. Its not to say its totally silent but we get very long stretches of no talking, which only adds power to when he chooses to have his actors speak. 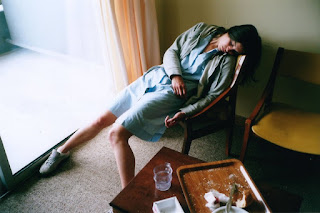 This film is one of the rare times I think a director remake would be a brilliant idea. At the core there is a very cool concept and he could take that and build upon what he has learned since the early '00's as far as pacing and storytelling. The result would no doubt be an intoxicating and engrossing psycho-sexual thriller. Kinetta premise seems to get lost in the directors glacier pace and experimenting within the medium. I have seen five our of seven of the directors films thus far and narrative wise this is so different as its not even super clean if you hadn't read the plot summary. I enjoyed seeing this despite not enjoying it nearly as much as his later work because its always great to see how a filmmaker grows and matures. Worth while for die hard Yorgos fans but probably way too slow for the casual film fan.

The film looks great and Kino has taken care to provide a print that looks clean and sharp. Face tones look natural and outdoor scenes dont look washed out or overly bright. The transfer truly highlights the work of Yorgos collaborator DP Thimoios Bakatakis (Dogtooth, The Lobster). Despite its pace the film is certainly visual and Kino celebrates that this with release.  The sound mix is a healthy 2.0 Mono track. Dialogue comes through crystal clear. The bonus features includes a commentary by film critic Amy Simmons. Simmons is very engaging and I actually walked away listening to with a greater understanding for this film upon my second viewing. Rounding out the features is a series of trailers for this and other Kino releases.