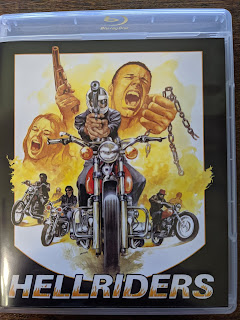 Every wonder what it would be like if Batman's Adam West and Ginger from Gilligan Island fame starred in a crappy '80's biker film? Well like it or not Hell Riders from 1984 answers that question and more. A woman named Claire (Tina Louise) traveling from Las Vegas breaks down only to discover a savage gang called The Hell Riders. The thugs assault her but she is able to flee. She travels to the nearby town for police aid but they are no help. After that she is patched up by the local doctor named Dave (Adam West) the gang invade the tiny town. Um...Yeah. So where to even begin. I've seen a lot of bad movies in my day and Hell Riders may not be the worst but certainly a mess. James Bryan is no doubt a fan of biker mayhem films but the film lacks any kind of cohesive story. We dont really understand why things happen and there is also this weird sub-plot about a local wedding which James really leans into and has no real bearing on the story. It also has a really jarring tonal problem which ranges from lighthearted hi jinks to hard to watch sexual assault/murder. This really reminded me of an early over-the-top Troma film with the people that inhabit it acting more like cartoon characters.Not to mention you can tell this was made on a dime. 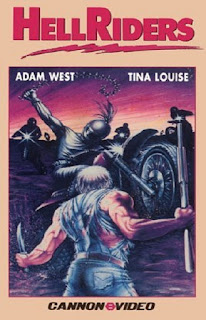 Thankfully James Bryan knows he's making a z-grade film and is clearly having a lot of fun with it. Its what kept me from actually hating this movie because despite some legit hard to watch rape, the film maintains a b-film charm and its local color in the form of the small town adds a hickspoltation flavor to the mix. West and Louise play everything straight while everyone around them either way over or way under acts. I will say the action scenes are pretty solid with some great Grind house style balls-to-the-walls stunts. And while not overly gory there is plenty of splatter and nudity if thats your bag. Hell Riders is no doubt a bad movie but Bryan seems to bask in the films low budget exploitation charms and has a lot of mean-spirited enjoyment with it all. This sense of tongue-in-cheek awareness helped gloss over the many issues this film has. If you want a mindless bit of junk food cinema you could do worse-and thats not a back handed compliment.

The film sports a great new 2k transfer from original 35mm camera negatives. Digital artifacts are scarce and colors are clear and vibrant. Its not without some flaws but overall it looks damn good, especially for an over thirty year old obscure film. I wager that this is the best this film has ever looked and probably will ever look. Nature and outdoor scenes really showcase just how clear this new print is. The sound is great as well with a nice 2.0 Mono soundtrack. As always Vinegar puts some love into each release and we get some fun extras. The main feature is a really entertaining interview with director James Bryan entitled "Straight to Hell" which runs just over fifteen minutes long. Say what you will about Byran's filmography but I think its awesome as hell that we VS has taken the time to interview and record a artifact like this. Rarely seen original story board gallery is also included. The movie is a limited edition of 3,000 and includes a great fold out poster with reversible cover art (same with the cover on the Blu Ray). I actually found this is to be a really fun bad movie and as always the good folks at Vinegar provides a great release. Worth owning.