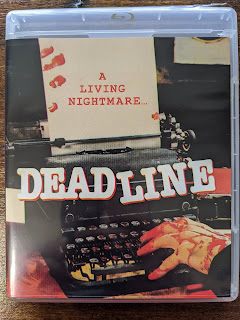 Nothing lights a fire under a writers ass like the dreaded 'deadline'. Having authored two books I know all too well that stress is part of the business. So, when I learned there was a horror movie that dealt with this very premise I knew I wanted to see it. At the time I learned of this movie it was not widely available but now thanks to Vinegar Syndrome it is, in HD! Steven (Stephen Young) is a horror author and screenwriter that is controversial but popular. Despite making a good living Steven's life is anything but idyllic, with a horrible wife and a bad case of writers block on this latest project. His fantasy life and reality begin to blur as he struggles to keep his grip on his sanity.


Made while the genre was still riding high on slashers, Deadline attempts something a little different with the genre, but is it successful? Despite  being a very basic premise I think its strong because its something a lot of people can relate to on one level or another. Sadly though the concept is feels woefully wasted. I dont often come a crossed this but I found the films narrative flow to be its biggest issue. For example, and without giving anything away Steven suffers a tragedy which feels like a perfect set-up  for the second act. Yet strangely this comes at an hour into the ninety minute run-time. Its incredibly baffling as at this point it feels too little too late. Deadline suggests a thriller but plays more like a soap-opera style drama intermixed with over-the-top horror scenes (that mostly are only in the writers head or current film production). It also doesn't help that all the characters are extremely unlikable especially the writer Steven (a not so subtle nod to Stephen King). Azzopardi attempts some humor but it too falls flat. A film of this ilk suggests it would be tailor made for social commentary about horror and societal ill's, and while it touches upon this briefly I felt like it never goes far enough to be effective or meaningful.  All of this might have been forgivable but the film takes itself far too serious for its own good. The end result is a dull melodrama that only kind of flirts with the horror genre. I think that had the story been streamlined with a tighter focus on plot I could see this having the makings of a great psychological horror film. I hate to trash all over a movie like this but it seems like it lacks even the basic story structure. Whats worse yet the characters are all awful and not engaging and therefore making it difficult to invest in them or the lack-luster story.

At the start of the film Vinegar Syndrome states the following:

The following presentation of DEADLINE is sourced from producer Henry Less' personal 35mm print. The original negative is believed to be lost. Although extensive image restoration and color correction work was performed, certain instances of damage were unable to be repaired without causing digital artifacting, and were therefore left intact. The soundtrack on the print also suffered some damage and was poorly printed, resulting in some inherent hiss and crackle.

While has there are times when damage is noticeable its honestly not enough to be distracting in the least. The film probably will never look as good as it does now and the new 2k transfer looks sharp and clear despite the issues mentioned above. I know the kind of love and hard work VS puts into their releases and so I dont fault them for issues out of their control. Having compared this to the un-restored trailer the difference is night and day. I think overall they did a great job and should be proud of their work on this. The sound is good as yes, as mentioned above there is some distortion in the soundtrack but again, its not bad enough to be distracting. Dialogue and music comes through clear. The extras include two brand-new interviews with producer Henry Less and cinematographer Manfred Guthe. They share some interesting insights into the production.

Great release for a obscure horror film, which is what Vinegar Syndrome is known for.